THE 6am alarm call is never welcome on a Saturday.

But it has afforded me time to polish the silver and iron the morning newspapers.

Now, in a brief respite from my duties, I am told the Manchester Evening News – said to be favoured by Mr Crawley – has this very day published my discussion with a young lady by the name of Joanne Froggatt.

Who may also be known to some of you as Anna, the head housemaid at Downton Abbey.

So before my next task of this bright October morn, I have posted the article below for your entertainment.

Along with a number of strange links, including one to what I believe is known as a podcast.

Where, incredibly, you can hear the voices of both masters and servants.

And even transport them on astonishing mobile devices, the like of which I cannot fathom.

Now, if you will excuse me, I must away to decant the port.

DOWNTON Abbey star Joanne Froggatt doesn’t hesitate when asked how she would have coped with life below stairs.

“I’d have hated it,” replies the actress who plays head housemaid Anna in the drama series, set in 1912, which has proved a runaway success for ITV.

“My grandma, who has passed away now, once said to me, ‘It’s very hard nowadays because you have so many choices, you don’t know where to go.’

“I’d much rather have the choices. I’d hate to say, ‘I can only have my career or I can only get married.’ I can’t think of anything worse. I love my career and I have aspirations both personally and career-wise, as well.”

She adds: “I suppose at the time you don’t know any different. So if you’ve grown up in that era and that was your upbringing, the choices aren’t there. You just accept your lot at the time. But looking back now, with all the things we can possibly do in our lives, then it seems a bit barbaric.”

Downton Abbey (ITV1, Sunday, 9pm) continues with the summer flower show in the village hall and Anna telling valet Mr Bates (Brendan Coyle) how she feels about him, as others try to get him into trouble. Manchester solicitor Matthew Crawley (Dan Stevens), the heir to Downton, is also attracting growing attention from Mary (Michelle Dockery).

“Anna is very sweet and kind-hearted. Her story has been a slow build over the series towards the middle and end, along with her feelings for Mr Bates,” explains Joanne.

“When they cast Brendan and I, they changed the story slightly because at first it was a much more immediate thing. They wanted it to build from a mutual friendship to something much deeper. A physical attraction. And it’s actually turned out so much nicer.

“Brendan and I loved doing their scenes. It was about them both respecting each other as decent people to start with, sharing the same sense of humour and all those natural things that happen. And later on there is a twist with Mr Bates. He’s got quite a few skeletons in the closet, which throws a spanner in the works of their relationship.”

Servants had to live by strict rules, even when it came to love. “You would have been sacked on the spot having relationships with other staff members or anybody else. It was absolutely not allowed.

“If you were a housemaid, you weren’t allowed men to call on the house. So however they did meet husbands was quite hard work because they weren’t allowed to talk to any men. They were kept very separate from them.

“A housekeeper was expected to stay a spinster. It was a choice between career and marriage at some point and every girl had to make that choice. It’s very rare that housekeepers were married, although they were always called Mrs because that was the etiquette.

“It was such a full on career and it was 24/7. They got half a day off every two weeks. So that then becomes their lives. Anna is head housemaid. So the next stage would be housekeeper in 15 or 20 years. In that time she’ll have to make that decision, ‘Do I marry and leave work? Or give up that chance and just have my career?’”

Joanne agrees that younger viewers may be puzzled as to why people went into service in the first place. “There wasn’t any choice, really,” she says. “For a working class girl of that era, especially in a rural area, it was either marry and be at home with the children, work on the farm with the family or the best choice at that time was to go into service.

“It was a chance to travel, which people didn’t do. You were born and bred in your little village and that’s where you stayed. It was also a chance to meet different people. A lot of women joined service to meet their match. Anna’s genuinely a quite intelligent girl but she’s happy with her lot.”

ITV is delighted with weekly ratings of up to 12m and a second series of eight episodes has been commissioned for broadcast next year. It means a return for the cast to real life “upstairs” location Highclere Castle in Berkshire and Ealing Studios, where most of the downstairs scenes were shot.

As well as working with an etiquette expert, Joanne did her own research into the period. “I read a lot of things on the internet, watched Gosford Park (also written by Downton Abbey creator Julian Fellowes) and The Remains of the Day. And I read a great book called Keeping Their Place, which was lots of letters between servants and employers. It gave you a real insight into the human side.”

Joanne, 31, was just 17 when she joined Coronation Street as tragic young mum Zoe Tattersall in 1997, leaving the next year. While working on Downton Abbey she swapped Weatherfield stories with fellow former Street star Rob James-Collier, who plays first footman Thomas. “Never say never but I don’t think Zoe could come back.”

She’s worked consistently ever since, including roles in Nature Boy, Island At War, See No Evil, The Street, Life On Mars, Murder In The Outback and plays a traumatised soldier returning from Iraq in feature film Our Name, which is released in December.

So where does Joanne see herself five years from now? “There’s a question. I’d like to be in Hollywood, married, baby, a millionaire…something along those lines,” she laughs.

Downton Abbey: What Is A Weekend? 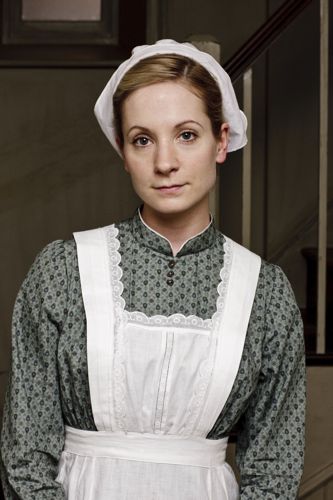