“WE have a duty to honour the spirit and memory of Rhys.

“As a society we should never let this happen again.

“The only way things are going to change is if we make changes ourselves.”

Which begins on ITV at 9pm this Monday (April 24).

Let me say right from the outset that Little Boy Blue is a very special drama from the production team that brought us Cilla and Mrs Biggs.

Based on the true story of the 2007 murder of innocent 11-year-old Rhys Jones in Liverpool as he walked home from playing football.

Stephen – who plays acting Det Supt Dave Kelly – and all involved poured their hearts into the making of this production.

It’s a compelling story of the patient police investigation to secure the arrest and conviction of all of the guilty parties.

The impact on Melanie, Steve and their eldest son Owen.

And the lies other parents told to try and thwart justice.

I visited the cast and crew during filming on location in Liverpool.

And also spent time with the production team in London.

Witnessing at first hand the skill, care and sensitivity with which this story was treated.

The memory of Rhys, who would now be 21 had he lived, always at the forefront.

As Dave Kelly told me: “It’s important to tell this story in a TV drama.

“It’s important to let people know about a little boy who was on his way home from playing football and for the act of some hooligan who wanted to fire a gun at some other yobs, he’s caught in the middle of it and has lost his life.

“There was a saying in the press that Rhys was in the wrong place at the wrong time.

“Melanie and Steve took exception to that. As did I.

“Rhys wasn’t in the wrong place at the wrong time.

“He was doing what he should be doing on a nice summer’s evening, minding his own business coming home from football practice, and this terrible act occurs.”

Little Boy Blue is one of the finest dramas I have seen in a long time. 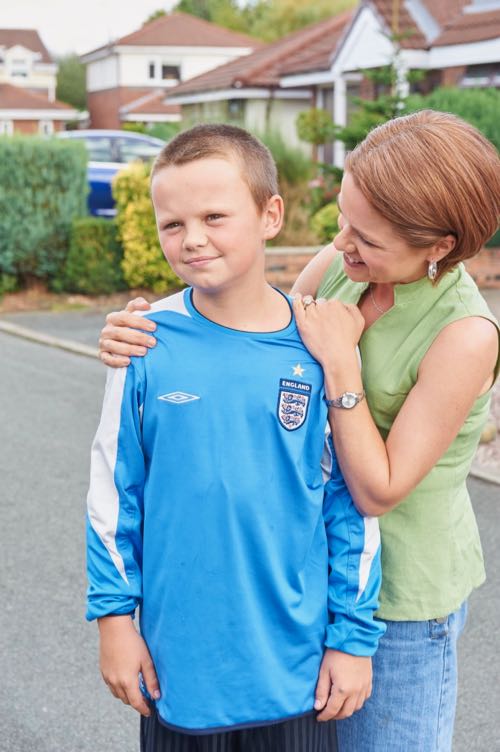