“IT was a very physical role, lots of running, hanging off bridges and climbing fences, hard work.

“But I must say I absolutely loved it.”

I spoke to John on location during filming on a cold and wet day at the start of January.

And again later when he had returned from making the first episodes of Intruders in Vancouver and was about to begin work on The Village 2.

While Chris and I chatted at ITV’s new Trafford / Media City HQ on January 6 – the official first day in that site’s history after the move from Quay Street in Manchester.

A fresh and exciting TV writer – currently bound for Hollywood – at the dawn of a new era for ITV in the North West.

You can read my interviews via the link to the ITV press pack / production notes below.

Including how John threw himself into the part and was injured during filming:

Also scroll down the page here for some of the production photos by Ben Blackall and a short film by Tim Royle from the Royal Television Society preview screening.

I’ve seen all three episodes of Prey and they are superb.

Yet another TV gem from the Red Production Company.

Filmed – as I saw on location – using only available light.

A fast-paced, edgy and compelling drama directed by Nick Murphy, whose previous credits include Occupation, The Awakening and Blood.

As you would expect, it’s a gripping performance from John.

And Nick Murphy has posted the first draft of his proposal for Prey at the link below: 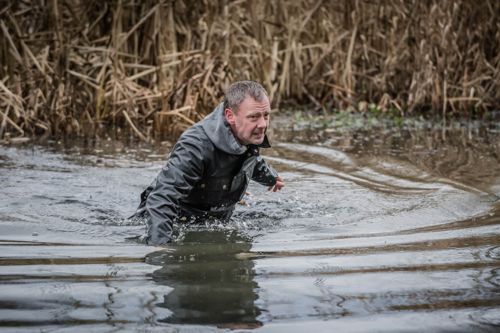