Otherwise known as the 2012 Christmas Special, just broadcast by ITV1 tonight – December 25 – in the UK.

If you have yet to watch it, do NOT read any further.

Come back later once you have viewed.

That obviously also goes for our American cousins waiting for series three to begin on PBS on Jan 6.

As well as other Downton fans across the globe who are not yet up to the UK series pace.

There are major spoilers below.

So unless you want to read them, stop now.

I’ve placed a photo of Mr Bates (Brendan Coyle) in the Christmas episode below.

To remind you that he still has friends of friends behind bars who will seek you out if you don’t do the right thing.

Followed by a treasured image of Mr Carson (Jim Carter).

And you don’t want to get on the wrong side of his silver service.

If you have any doubts whatsoever, please leave now! 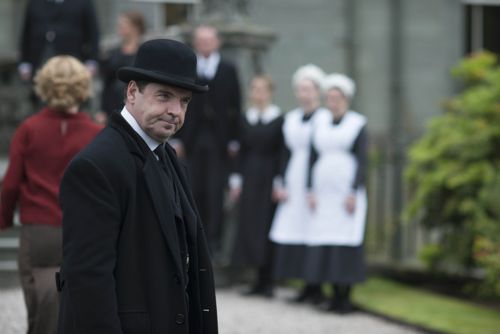 For those still here who have seen the two-hour ITV1 episode, you will know that we have to begin at the end.

There has been much speculation about Dan Stevens’ future in the series.

But ITV, Carnival Films, the cast and crew, post-production team and everyone else involved deserve applause for keeping those final scenes a secret.

Whatever your view on the loss of Matthew Crawley from the show.

No preview tapes were made available to the media ahead of tonight’s screening.

As had been the case before the shock death of Lady Sybil earlier in this series.

The killing off of Matthew in this high profile Christmas Special, however, involved much higher stakes.

Dan, like Jessica, no doubt felt the time had come to move on.

With no other realistic way to write him out aside from a dramatic death.

Perhaps we should have seen the clues, especially in the way Julian has positioned the series this year to bring in new regular characters, as well as retaining the old.

There was also a quote from Hugh Bonneville (Robert, Lord Grantham) during an appearance on Jo Whiley’s BBC Radio 2 show back in November.

Although I don’t think it was reported elsewhere, I made a note of his reply when asked if this year’s Christmas episode would make viewers cry.

“That’s the wonderful thing about the show,” he said.

“It tugs you in so many directions in the space of one episode or even one scene.

“But there’s plenty of everything in this episode, I can assure you.” 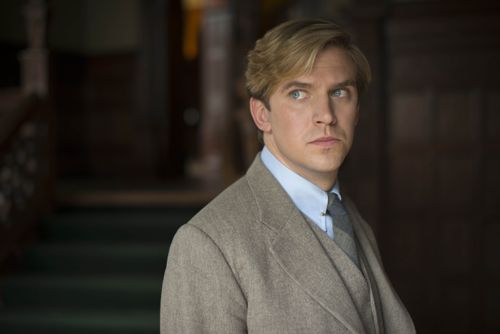 As the forward-thinking heir to Downton and married to Lady Mary (Michelle Dockery), Matthew was a cornerstone of the series.

A position cemented by the arrival in the final part of tonight’s episode by the birth of his own son and heir.

I suspect many viewers would have been happy to go to bed on Christmas night having seen the future of Downton assured in a Yorkshire hospital.

“Hello my dearest little chap,” said Matthew as he held his son for the first time.

“I wonder if he has any idea how much joy he brings with him?”

To which Mary replied: “We have done our duty. Downton is safe.”

In the light of what happened next, repeat viewings of Matthew and Mary’s final moments together – and that last kiss – will take on extra poignancy. 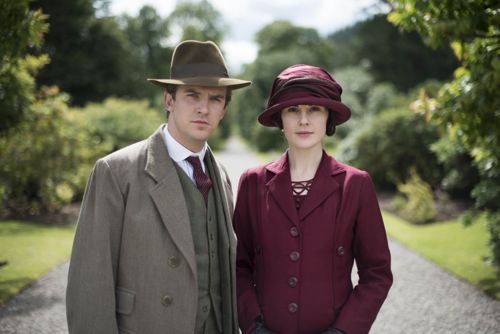 The rest of the family are gathered in the Downton library. Robert and Cora (Elizabeth McGovern) have a grandson.

All is well. Roll the closing titles?

Cut to an overjoyed Matthew driving his sports car back from the hospital, through the Downton woods on a single track road.

Then back to Robert in the library, remarking, “Life is strange, isn’t it?”

Is this a new father motoring into a wonderful future?

Or a man actually driving towards his death?

A small lorry is seen coming up the rise of a hill towards Matthew’s car.

We don’t see the actual accident or hear the noise.

Just the aftermath plus soundtrack.

The car is off the road, upside down among the trees.

With Matthew, eyes open, trapped under the car. Clearly dead.

Back to Mary in her hospital bed with Anna (Joanne Froggatt) at the bedside.

The camera goes back to the accident scene and the blood from Matthew’s fatal injuries.

And then a final shot – a slow zoom, held for just that little bit longer than might be usual – of Mary with her baby son.

Yet to learn the terrible news that will cast a long shadow over them both.

I know fans will be upset that Dan has left the series.

But Julian and all involved certainly gave him a classic exit.

Of course it’s sad that a favourite character is killed off on Christmas night.

But let’s remember that he is just that – a character in a fictional drama.

It leaves Dan free to, hopefully, enjoy other major successes on stage and screen.

While also giving Downton a serious kick-start into series four.

That begins filming in February for UK broadcast next autumn. 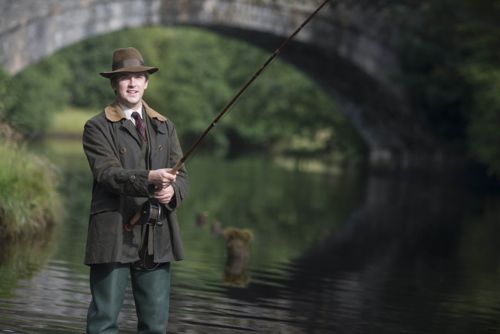 A year ago today the final scene of Downton Abbey’s 2011 Christmas episode ended in the most romantic of festive ways.

Matthew proposing to Mary as the snow fell.

This year we were reminded that, in life, not all endings can be happy.

And that none of us have all the time in the world.

No-one in the Downton team wants the show to outstay its welcome.

Some observers have predicted that Julian and co may be planning to end on a high in 2014 after a total of five series and perhaps one last special.

Whatever the truth, you could argue there wasn’t much fresh ground for Dan to explore in Matthew in future series.

But his departure certainly opens up more avenues for Mary’s storylines and the series as a whole.

So what of the rest of this visit to Downton?

The episode began “one year later” from the last time we visited the estate.

We learned that the high point of his Lordship’s calendar was nigh.

A rather grander family home than Downton. But then as we were to learn later, appearances can be deceptive.

Rather more importantly, it was very quickly revealed that Mary is eight months pregnant.

Hence the episode’s time shift after some expectant “child imminent” signposting in the previous episode.

Former chauffeur Tom with now toddler “Sybbie” in his arms, is staying behind at Downton.

Along with most of the below stairs cast. 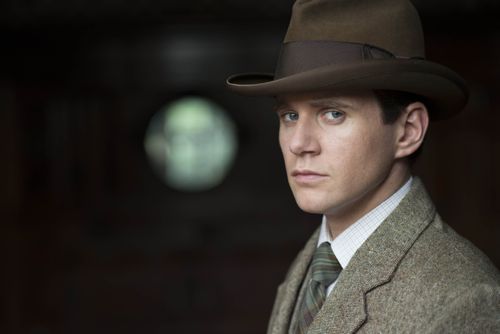 One of the highlights of this episode was the performance of the superb Allen Leech as widowed and still grieving Tom.

All alone but rejecting the approaches of new maid Edna (MyAnna Buring).

Finally breaking down in a library scene of real tenderness with the always pitch perfect Phyllis Logan as Mrs Hughes.

The wise housekeeper helping him both take his new place in the world and cope with his loss:

“You must bear it. And one day I hope – and so would she – you’ll find someone to bear it with you. But until then, be your own master and call your own tune.”

Not hard to imagine that Julian might have big series four plans for the Downton land agent? 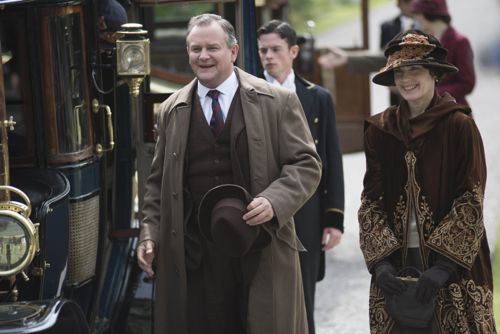 With the rest of the family away, Mr Carson’s efforts to keep his staff on the straight and narrow provided some light among the shade.

“I don’t understand,” he ventured when asked about giving the servants a break.

“Has someone forgotten to pay your wages?”

Among other things I liked / noted about this visit to Downton:

And why wouldn’t Daily Sketch editor Michael Gregson (Charles Edwards) happen to be in Scotland at the very same time as she is..?

– John Henshaw as Joss “I love to be in love” Tufton, a man with plans in store for Mrs Patmore (Lesley Nicol).

– The twist in Mrs Patmore’s tale.

– Simone Lahbib given the O’Brien look as kindred spirit Wilkins.

– The 8 o’clock bagpiper. Also playing all through breakfast to ensure no lie-ins. 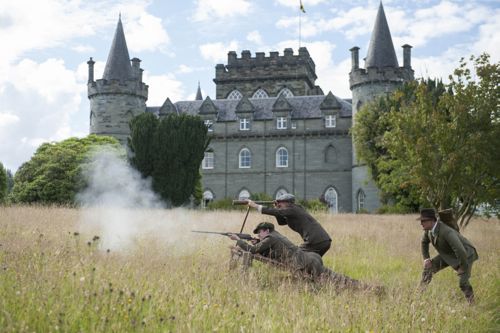 – Robert commenting on his pregnant daughter: “I’m worried about Mary bumping through the Glen.”

– The exchange between Daisy (Sophie McShera) and Thomas (Rob James-Collier) about Mrs Patmore’s decision to buy a new dress:

– Julian rewarding viewers after all those prison episodes with lots of shining love between John and Anna Bates. It surely can’t bode well for the next series?

Edith: “How tiny the Glens make one feel.”

Violet: “That is the thing about nature. There’s so much of it.”

– Alfred (Matt Milne) and Jimmy (Ed Speleers) taking a break from work in the drawing room.

– The swings and roundabouts of life at Thirsk Country Fair – Thomas later making his peace with Jimmy. 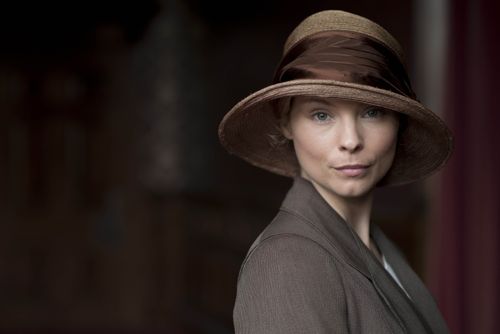 – Back in the Highlands, Matthew telling the lovestruck Mr Gregson: “You have been misled by our surroundings. We’re not in a novel by Walter Scott.”

– Lady Rose (Lily James) coming down to dinner in the latest fashion – ahead of her full-time move to Downton for the next series.

Her mother Susan telling her to change, saying: “She looks like a slut.”

Prompting Violet to remark: “Heavens, that’s not a word you often hear among the heather.” 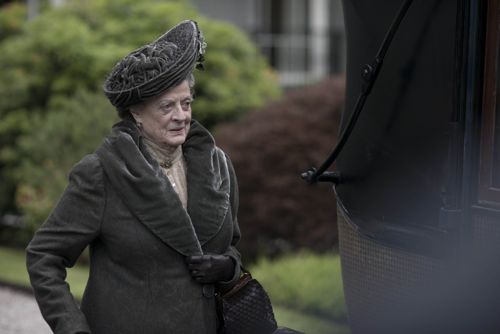 – Molesley reeling at the Gillies’ Ball.

– Old softie Mr Carson taking Sybbie out of her cot – and later breathless and flustered after taking the phone call from the hospital where Mary has just given birth.

– And Shrimpie asking Cora to remind Rose that family can be a loving one:

“Love is like riding or speaking French. If you don’t learn it young, it’s hard to get the trick of it later.”

Dec 26 Update: ITV statement: “After three successful series and two Christmas editions of Downton Abbey, Dan Stevens decided not to renew his contract beyond the initial three years he had been contracted.

We wish him every success for the future. Michelle Dockery will be returning to her role as Lady Mary in series four which begins production in February.

Over the last three years, audiences across the world have been captivated by the ups and downs of Mary and Matthew’s relationship, culminating in their wedding.

Fans have enjoyed what has become a solid and loving marriage. It is for this reason that the Producers decided Matthew and Mary could not simply be estranged or parted, resulting in his untimely and tragic death at the end of the Christmas episode.

In the next series, alongside all the usual drama, comedy and romance involving the much loved cast of characters, viewers will see Mary adjusting to her life and attempting to move on without the man she loved.”