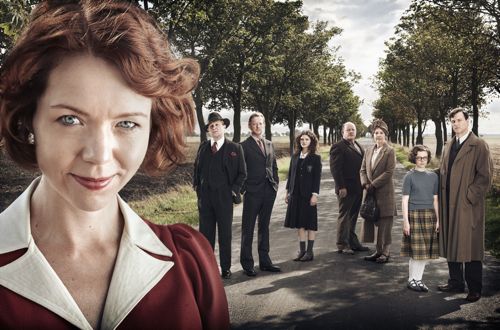 IT begins with Anna Maxwell Martin on a steam train and David Morrissey riding a horse.

Both heading for the same destination.

If you’re in the UK and able to watch, do yourself a favour tomorrow (Sunday).

Record anything else you might want to catch and settle down to watch BBC1 at 9pm.

South Riding is a glorious three-part drama that will make you laugh and cry in equal measure.

With some of the best performances I’ve seen on screen in many a year.

Together with a cracking script telling a gripping story, beautifully filmed for our Sunday evening pleasure.

What more could you ask for?

My feature on the drama is in today’s Manchester Evening News.

I’ve posted it online below, followed by some audio from Peter Firth.

Also check out the links at the bottom of the blog, including the official BBC site which currently features two background videos on the making of the series.

Sarah is a remarkable woman. A 1930s lady in red who returns home from London to change lives forever.

South Riding (BBC1, Sunday, 9pm) is a television treat destined to be near the top of the class when the awards are handed out.

Anna Maxwell Martin plays fiery blacksmith’s daughter Sarah, who goes back to Yorkshire to take charge of the crumbling local girls’ school with the country still in the grip of economic depression.

Although you’d never guess from her performance on screen, Anna found standing up in front of her screen pupils a daunting experience.

“It was terrifying – it’s quite frightening trying to be inspirational. I would never dare be a teacher, I would be far too scared,” she says.

Sarah lost the love of her life in the First World War and isn’t looking to replace him. But passions stir with Carne, even though he is dead set against her plans for the school and has his own personal heartbreak to deal with.

Episode two finds Sarah Christmas shopping in Manchester and bumping into Carne in the same city centre hotel, where they have both booked rooms for the night. The dinner dance band play Love Is The Sweetest Thing. But nothing is quite that straightforward in this engrossing tale.

“South Riding is a rollicking great story about unrequited love and social conscience,” says David. “What’s relevant to a modern audience is that it is set in a time when there is great economic hardship.

“There are cuts hitting people left, right and centre. The banks are closing and calling in debts. The local council is trying to spend their way out of that by creating better conditions for working people by putting them into proper housing. Other people have ulterior motives for doing that, so what you see is the murky world of the dealings of local councils.”

It was a homecoming of sorts for Bradford-born Peter. He explains: “South Riding doesn’t exist. It’s east Yorkshire where the book was set and where we shot a lot of it too. I spent a lot of my youth there on the east coast. So it was great to go back and explore.”

Peter sports a very different look, mainly thanks to that wig. “That was the idea. I wanted to try and get away a little bit from Spooks. I’d been looking at hairstyles and saw a 1930s’ picture exactly like that. So I took it with me and we got that look.”

He believes the story will grip 21st century viewers. “It’s a really early feminist novel. Then, for a woman to behave like that was very, very unusual. Now it’s commonplace, of course.

“Drama is about moving people. And if you want to be moved and transported and taken out of your life for a little while, then this will do it for you – I watched the whole thing last night, all three episodes, and I cried twice. And I’m a little past crying these days. I’m all cried out. But it moved me very much, and I knew what was coming.”

Peter adds: “Hopefully people will read the book after watching this because it’s a fantastic read. I said I’d do anything in this adaptation and I looked at a couple of parts, but ended up with Snaith.”

Author Winifred wrote South Riding just before her death 75 years ago at the age of 37.

“The tragedy is she died very soon afterwards, so a great literary talent was lost to us,” says David. “We can only speculate about what she might have gone on to write, but I think she may have been one of our great British novelists.”

Peter Firth doesn’t get a huge amount of screen time as Alderman Snaith.

But his scenes are certainly memorable.

Including a moment in episode three which should certainly win the BAFTA for Best Line Delivered To A Cat.

Here are a few short audio extracts from my chat with Peter:

4. Speculation that the next – 10th – series of Spooks may be the last?

5. No decisions made on Spooks?