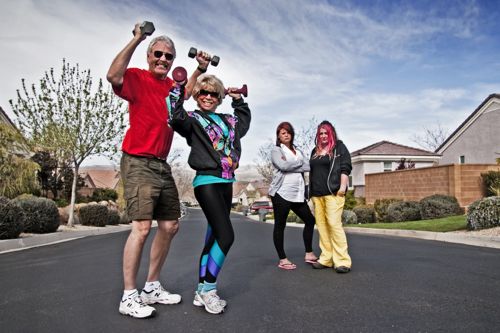 IT’S never too late to change.

I have to admit that BBC3 documentary series Are You Fitter Than A Pensioner? would probably have passed me by.

Had I not been invited to interview some of those who flew to America to take part.

Discovering some rather inspiring transformations along the way.

So whatever age you are, perhaps you might care to check out the next episode at 8pm tonight?

In the meantime, here’s my feature running in today’s MEN.

Swapping bingo, booze and junk food for gyms, hikes and fridges stocked with healthy food, they’re doing everything they can to help the aged stay forever young.

So what happened when unfit and unhealthy British youngsters flew over to spend a week living with couples who are making old age a thing of the past?

Nicole Pereira, of New Moston, used to live on fried food and found the gym boring. “I went once every three months and had a shocking diet. I never watched what I ate. I just lived my life as I pleased,” she recalls.

Now 23, she is one of four couch potato Brits who feature in this week’s episode of Are You Fitter Than A Pensioner (BBC3, tonight, 8pm).

Nicole stayed in Oakmont Village, California, at the home of hosts Ron, 71, and Bev, 68, two of the fittest pensioners on the planet.

Next week we see how Anthony Massey, 22, from Stretford, got on when he spent a week in Sun River Active Retirement Community, Utah, telling his hosts: “My only exercise is what I call a rave diet.”

Both returned home changed from their experiences, having learned how they were prematurely aged by their Manchester lifestyles.

Before getting a full flavour of their hosts’ exercise and healthy eating regimes, including bike rides, dancing and swimming in San Fransisco Bay, they were given an initial test which put Nicole’s “fitness age” at 41 and Anthony’s at 44.

Store assistant Nicole struggled to keep pace with Bev on a 45-minute walk as her group of Brits trained to take on the pensioners in a cycle race at the end of the week, meeting fitness fanatics, including an 88-year-old retired Admiral.

After a visit to help out at a local care home, a determined Nicole reflected: “It’s taught me not to take my life for granted. Not to go out and party all the time. I’m not going to give up for anyone.”

Now back home, she says: “America was an eye-opening experience. I was disgusted by my fitness age and not being able to keep up. I didn’t work out regularly. Now I go to the gym every day and have also joined a boxing gym.

“I couldn’t tell you the last time I had a fry-up. I used to go out all the time and drink a lot. I don’t drink alcohol now and I’ve stopped smoking. I’ve made new friends and my old friends can’t believe I’ve kept it up. My mum is very pleased and has even joined my gym. It’s changed us all for the better.”

Still in touch with the couple who helped turn her life around, Nicole adds: “I asked Bev what her reason was for keeping fit and eating healthily.

“And she said, ‘Do you know, when you find somebody that you love and you want to spend the rest of your life with them? I want to stay alive long enough so I can spend as much time with Ron. That’s why.’”

Anthony’s experience has also stayed with him. “I had a pretty good job. I used to have my own house, my own car and everything. Then I gave it up to have a good time. A year long party,” he explains.

He stayed with Tom, 66, and Pam, 65, Mooney, telling them that the clubs of Manchester were his gym. Also admitting to a past life of drink and drugs, while acknowledging they could destroy his health. But maintaining: “I’m not a complete wreckhead.”

His concerned mum Lisa tells the TV programme: “I don’t think that he realises how bad it’s going to be for him in 10, 15, 20 years’ time if he makes it that far. Not good.”

Tom’s 6am starts are usually the time Anthony is having a liquid breakfast on the way to bed. The retired steel worker spends over 30 hours a week keeping fit, having had quadruple heart surgery three years ago.

He says his motto is: “Winners never quit. Quitters never win.” Anthony replies that his is: “Sleep when you’re dead.”

Yet there are signs of change at the end of the week as an emotional Tom says a tearful farewell. “I have been on a pretty mad little journey this week. I’m just going to grow up,” said Anthony.

Several months later, he has taken up sport, including cycling, and is planning to start his own business.

“The week in America was an official end to the party. It was always in the back of my mind to get my life back on track. I just needed a kick up the backside, which this gave me. It made me feel that if Tom cares and shows me what I can do, then I can go out and do it for myself and make someone proud,” he says.

“I’m keeping myself active in a positive way and trying to lay off going partying all the time because it’s not too good for the old liver and kidneys. It’s part of my life and I do enjoy it. But I thought, ‘You’ve got to work hard, then play hard. Instead of just playing hard 24/7.’

“My mum is happier to see me doing what I’m doing. She was starting to worry that I was going to party for the rest of my life. People my age don’t all end up being drug addicts or on the dole. It’s proof that you can change.”

Are You Fitter Than A Pensioner? BBC Site