Rory Kinnear talking to me about new two-part ITV drama Lucan, which tells a story most will not know.

He plays the Lord who created a headline-grabbing mystery after murdering his children’s nanny Sandra Rivett (Leanne Best).

Having mistaken her in a darkened basement kitchen for his wife Lady Lucan (Catherine McCormack).

And then vanishing – never to be seen again.

The two 90-minute films by award-winning screenwriter Jeff Pope tell the wider story of a Mayfair gambling world where fortunes were lost by the aristocracy.

Most of the money ending up in the pockets of gaming club and zoo owner John Aspinall (Christopher Eccleston).

A man who befriended people like Lucan and drew them into his orbit.

The drama details the bitter marriage breakdown of John and Veronica, Countess of Lucan, along with the battle for custody of their children.

Moving on to the murder and then what happened to the 7th Earl of Lucan after his disappearance.

My interviews with Rory Kinnear, Christopher Eccleston and Executive Producer Francis Hopkinson are in ITV’s production notes for Lucan at the link below:

Inspired by John Pearson’s book The Gamblers, the second part of the drama has a fascinating conclusion.

Revealing that story of Lucan’s fate after that awful night in November 1974.

No-one can know for certain.

As Jeff Pope points out in the production notes:

“It’s important to underline that what John Pearson was told is only a theory, a version of events given to him by a dying woman.

“Could there be a ring of truth to it? Ultimately, that’s for the audience to decide.”

Having seen the first film and read the script for the second, I found it to be a very convincing explanation.

As ever with these “real life” dramas, there’s been a bit of fuss about whether it should have been made or not.

But as Jeff says, best watch for yourself to make your own mind up.

With the cast also including the likes of Jane Lapotaire, Gemma Jones, Rupert Evans plus Paul Freeman as John Pearson and Michael Gambon as the older John Burke, who was the financial director of Aspinall’s club in Mayfair. 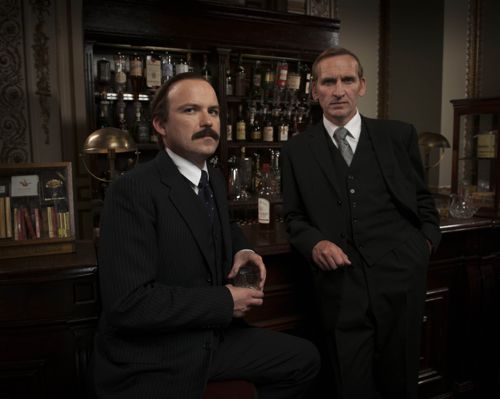