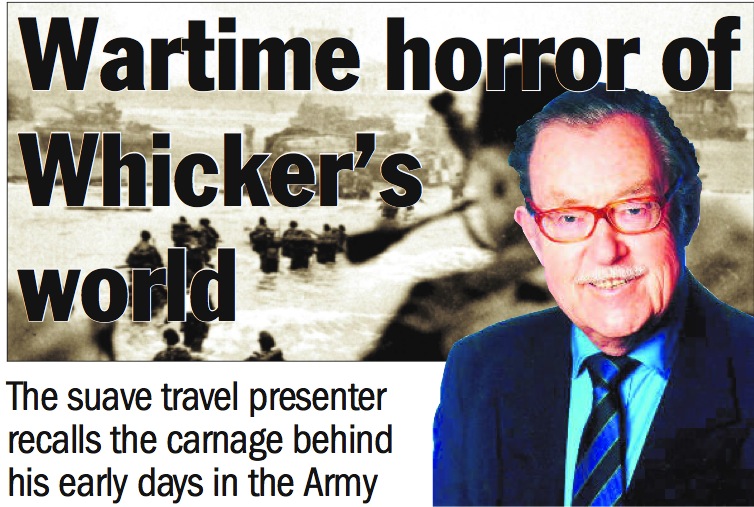 JOURNALIST and broadcasting legend Alan Whicker has died at the age of 87.

In his later years he lived quietly on the beautiful island of Jersey and often entertained journalists seeking to interview him.

All were plied with his charm…and champagne.

His passing reminded me of the last piece I wrote about him – for the Manchester Evening News in August 2004.

THE trademark glasses, blazer and voice say it all. Alan Whicker is a TV icon who brought the world into millions of homes.

Recently seen in a series of classic Travelocity television commercials, his smooth style led to the founding of an Alan Whicker Appreciation Society.

Whicker’s World dominated the schedules for five decades. But his career actually began amid the horrors of the Second World War.

Sixty years on, Whicker’s War (Channel 4, 9pm tonight) finds Alan retracing his steps as a teenage director of the Army Film and Photo Unit, which followed the Allied advance through Italy, from Sicily to Venice.

On leave after his training in 1943 and preparing to go to war with the infantry, he went to lunch with an uncle in London. Another guest at the table asked him if he’d like to joing the AFPU instead.

“At least it got me out of the infantry, which was miserable. Although, of course, I saw far more action with the film unit that I ever would have done with the infantry,” he recalls.

“I soon discovered that if you had to be in the Army, the film unit was the place to be. It offered travel, variety, meeting interesting foreigners and trying to stop them killing you, and as much excitement as you could have – sometimes more.”

Many of the historic photos used in the two-part documentary were taken by Whicker himself and reflect the nightmare of war. Chasing the action for newsreels and newspapers back home, eight of his 40 cameramen were killed and 13 seriously injured.

Whicker, now 79, didn’t expect to live. “You always thought something terrible was going to happen.” He recalls visiting a field hospital amid the carnage of Anzio. “One gravely injured young officer had been lying all day on a stretcher waiting for treatment, and as a doctor hurried by, asked quietly if his injuries could be treated.

“The doctor saw instantly that there was no hope for him, so said gently, ‘I’m afraid we’re not quite ready for you yet.’ The young officer nodded. ‘I quite understand,’ he said, and closed his eyes. In wartime, brilliant fragments of courage and nobility pass by unnoticed.”

Whicker admits his remarkable Italian journey, which concludes next week, was an emotional and very personal experience. He talks movingly of seeing some of his colleagues blown up right in front of him. “It’s two hours of me explaining what happened and why I’m still alive. I remembered almost everything, including the houses where we were billeted.

“Making the programmes brought back to me how lucky I’d been. When I saw where we’d been and what we’d had to do, I realised how amazing it was that I’d survived, and survived without injury. I lived through the most horrible, and in some ways the most happy, days of my life.”

Blessed by the Pope after the liberation of Rome, Whicker later raced ahead of British and American troops. Finding himself one of the first allied officers into German occupied Milan, he received the surrender of the local SS headquarters, surrounded at the time by an Italian mob out for blood.

The prisoners then presented him with the key to a treasure chest filled with millions of pounds in currency of all sorts. He toyed for a moment with the thought of placing the trunk in the boot of his unmarked civilian car and driving away, but later handed it over to an American tank regiment.

Whicker ended his war in Venice, editing a forces’ newspaper. He eventually returned home to embark on a career in print – and then television – journalism. Today, few of his wartime colleagues are still alive.

He notes that his “brother officer”, who died in that field hospital at Anzio, had some 60 years of his life taken away from him.

“I’ve been very lucky in my life, and my luck was underlined for me when I walked through all these assault landings without shedding any blood – when so many of my friends paid a terrible price.”