“THEY don’t know him. But he knows them.”

The Fall is one of the most compelling drama series I’ve seen in recent years.

A top class script matched by superb cast performances, direction by Jakob Verbruggen, editing, soundtrack and anything else you’d care to pick from the end credits.

I attended the London press launch last month and wrote the below story the next morning – used the day after as a TV centre spread in The Sun.

For some reason it didn’t also go online – so let’s put that right now.

With a few extras from the Q&A under the story.

Both hunters in their own way.

I’ve now seen all five episodes and believe all concerned, including writer Allan Cubitt, deserve to be in the running when TV awards panels sit down to deliberate.

While Jamie is a revelation – chillingly believable both as the horribly twisted, cunning, ritualistic killer and the loving father and family man everyone believes him to be.

There are also wider layers to this Belfast story that begin to unfold in episode two.

The dark nightmare of what Paul Spector will do next always flickering away in your mind as you watch.

As Stella explains: “It about power and control and the thrill.”

And what of the killer who could be a friend and neighbour in any street?

As he points out:

“No-one knows what goes on in someone else’s head.”

GILLIAN Anderson has warned viewers will be shocked by her new X-rated TV drama.

The former X-Files star hunts a serial killer who stalks his young female victims before murdering them in their homes.

BBC2 bosses will broadcast a warning before each episode of disturbing five-part drama The Fall, on screen next month. (May 13)

Filmed and set in Belfast, Gillian plays Det Supt Stella Gibson who is brought in from London’s Met Police to review the investigation and hunt for the perverted monster.

With Once Upon A Time actor Jamie Dornan – who once dated Keira Knightley – as psychopath Paul Spector, a married father-of-two young children and grief counsellor.

Gillian, 44, agreed the tense psychological thriller could be particularly frightening for women living on their own.

“It’s pretty shocking,” said the London-based actress who played alien investigator Dana Scully in The X-Files and was a fan of Helen Mirren as Jane Tennison in Prime Suspect.

Enigmatic Stella could turn into a long-running role, with creator and writer Allan Cubitt already working on scripts for a second series.

“I was always a fan of Prime Suspect and had read other attempts at re-creating that and always found them lacking,” explained Gillian.

“And there was something about this that felt like it had the depth and complexity – and yet simplicity – of that series.

“I really liked her – I love how we don’t really get to know who she is or what makes her tick.

“I’ve played other law enforcement officials before. In good scripts a character comes off the page and that was certainly the case with this. I could taste her from the first few pages.”

Asked if she could see Stella as a returning character, Gillian replied: “Definitely.” 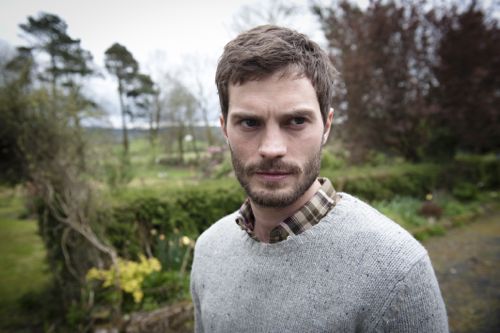 Gillian filmed a sex scene as part of the drama as Stella summons local Belfast police detective James Olson, played by Ben Peel, to her room at the Hilton Hotel.

The Great Expectations and Bleak House star lived like a “hermit” during filming with Gillian and Jamie mainly kept apart from each other during the project.

“Even if I have a few days off, I generally just stay in my hotel room.

“That’s not keeping in character. It’s just keeping my mind on it and working on it.

“I’ve worked with actors who keep in character all the time. I don’t do that.”

The truth is out there from the very start with the killer’s identity unmasked as he plans the sexually-motivated murder of a young solicitor.

Creeping into her bedroom while she is out to arrange her underwear and a sex toy on her bed.

Later stalking her in Belfast’s Botanic Gardens while out with his eight-year-old daughter.

Jamie, 30, said he found it hard to reconcile loving family man Paul with his twisted other side, including keeping detailed drawings of his victims.

He apologised to the young actresses involved in scenes where their tied-up terrified characters are strangled as the killer acts out his fantasies.

Arranging their naked bodies is careful poses before making his escape.

“It’s not easy to have ligatures round some young actresses mouth and watch her eyes bulge out of her head and sweat and try to look like you’re getting an element of satisfaction from it,” said Jamie.

“It’s a very strange place to put your head in for three months. There’s horrible aspects.

“But it’s an amazing character. They’re the best scripts I’ve ever read.” 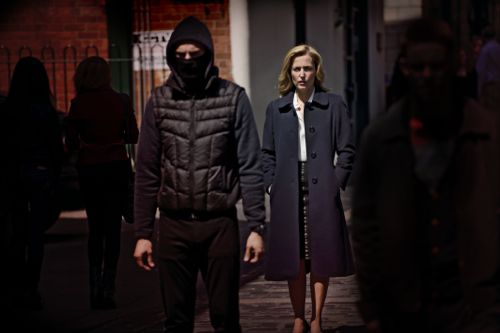 The drama follows the two hunters – police and killer – at the same time and explores the psychology of the murderer as well as giving the audience time to get to know the victims.

“I wanted to avoid having a faceless victim at the start of the drama. I wanted the audience to make some connection with the victim,” said Allan.

BBC drama boss Ben Stephenson confirmed a warning would be broadcast before the episodes aired.

He added: “BBC2 is about pushing the boundaries and telling stories in a different way and has done a huge amount of challenging material over the last few years.

“It’s a powerful, compelling piece. You feel the actual reality of the situation and get to know the victims as people. Which invevitably makes it more emotionally difficult in places.”

Creator and writer Allan Cubitt on getting to know Spector’s victim in the first episode:

“I hope that we will have made some emotional investment in her and her family. And the way in which the killer is capable of compartmentalising his life. These people are incredibly difficult to catch.”

“I’ve read lots of horrible stuff. A lot of these guys live very normal lives, have girlfriends or wives and solid jobs and are able to separate the rotten stuff from who they really are. People are none the wiser to what they’re getting up to at night.”

Jamie on co-starring with Gillian Anderson:

“This is about the fourth time we’ve ever met. We met at the read through, bumped into each other in the make-up trailer a couple of times and done some press together. And that’s it. It wouldn’t have made any sense to hang out.”

Gillian Anderson on how the arrogant killer takes risks before he takes a life:

“Practically revealing himself before the deed, many times over. That’s intriguing to watch.”

Gillian Anderson on Stella’s swimming pool scenes – her way of releasing tension and thinking about the killer:

“I’m actually not a swimmer. I don’t like water very much. The swimming pools add to the creepieness of it.”

As part of her research for the role she bought The Senior Investigating Officer’s Handbook – a book published for police use.

Producer Gub Neal: “It’s very rare that you get an opportunity to spend five hours in the company of someone like Paul Spector – a grief counsellor and monster at the same time.” 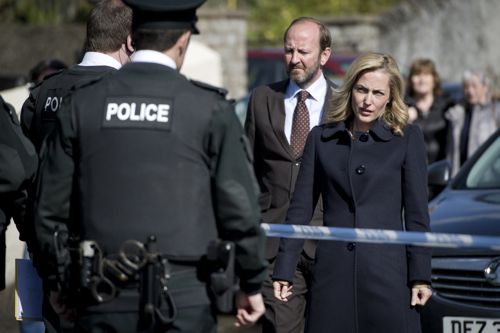