SHE’S the legend of the Streetcars’ switch who is never seen.

But has had plenty to say since she discovered the wonders of Twitter.

Actor Steve Huison knows her better than most.

I spoke to him again recently ahead of his Manchester stage performance this week.

The interview is in today’s Manchester Evening News – but my flamin’ story has yet to go online.

So let’s put that right below.

Followed by a few extras from Steve.

You may know by now who is behind Fat Brenda on that tweeter – and it’s not Steve.

But I decided against spelling it out.

Whatever the facts, she’ll always be a woman of mystery to me. 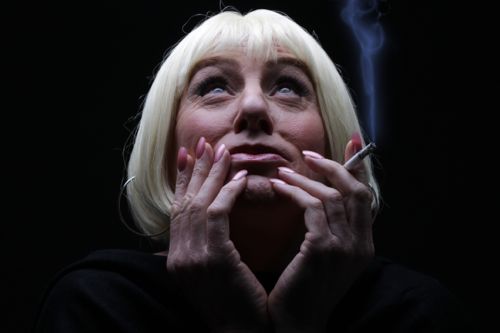 CORONATION Street’s hidden star has finally been brought out of the shadows by a former Weatherfield resident.

Now he’s back on stage as Fat Brenda, the night shift switchboard operator at taxi firm Streetcars, who is regularly mentioned on screen but never seen by viewers.

The Full Monty star Steve, 49, takes on his first female role to star as Brenda in a new comedy at Sale’s Waterside Arts Centre on Thursday (May 24), ahead of a national tour.

But the ex-Corrie cast member has vowed to keep long-suffering Brenda a mystery as far as TV audiences are concerned.

“We’ve had invites to do television interviews but she’s going to remain in the play and not coming out and making any TV appearances,” explained Steve.

The phenomenon of the Street’s “ghost character” took off in 2010 when @fatbrenda began to talk about her life on Twitter.

Steve was one of the first to engage online with Brenda as she discussed her love of Mellow Bird’s Custard, Dunhill cigarettes and Cliff Richard.

He later teamed up with Manchester writer and musician Joe Parkinson who developed the new play called Fat Brenda – My Flamin’ Story.

“We approached ITV and they gave the project their blessing as it’s not our purpose to be derogatory to them or any of the other characters or actors,” added Steve.

He hopes it won’t just be Coronation Street fans attracted by the wider themes of Fat Brenda.

“There are a lot of people out there with potential that never gets recognised. A huge thing within society that once you hit your 40s and 50s you’re nobody. You don’t exist.

“Especially in young people’s eyes or in fashion and for women, who are judged more on how they look rather than what they are as a person.

“Nobody ever sees Brenda. She’s never noticed. She’s a character looking for an identity and a life of her own.”

Actress Debbie Rush, who plays Eddie’s ex-partner Anna, is among a number of Corrie stars set to be in the audience for Brenda’s big night.

Steve is also due to appear in Dumb Show at The Grange Arts Centre in Oldham from June 12 to 30. He plays Barry, the star of Saturday night TV, in the drama about celebrity culture.

Not that the actor is able to keep up with either Coronation Street or the latest celebs on the box. “I don’t possess a television set. I haven’t had one for 12 years. I’m completely out of touch.

“Now and again I do watch TV if I’m round at someone’s house or in a hotel. I see all these people described as celebrities and I’ve no idea who any of them are.”

It always seemed strange to me that Eddie Windass was whisked off screen with some haste just as the character had settled down. But Steve is realistic about an actor’s lot:

“They wanted a change. That’s what I was told. They couldn’t see any mileage in the character anymore. I had plenty of ideas of my own but it’s not my job to tell them where to go with it.

“They wanted shut of the character. I think a few people upstairs found him a bit too grubby and too earthy. And I don’t think they wanted that in the show at the time. I’ve got no hard feelings about it at all.

“It’s the wonderful world of soap. I don’t even spend time trying to work out what all that was about, to be honest. There’s no point in allowing any of that to become personal in any way.

“These things come and go. I was fortunate enough to have a good two-and-a-years’ worth of steady work and I enjoyed playing the part.

“Whether he’d ever come back or not I don’t know. They’d have to give me a lot of notice to grow my hair, which I won’t do too happilly to be honest.”

Eddie is still in Germany?

“Yes. With Len. Eddie is adamant that he’s got to go off and work. When he’s spent two-and-a-half years trying to avoid work.

“Now and again I keep reading things on the internet or on Twitter, people saying, ‘Whatever happened to Eddie? One minute he’s there and one minute he’s not?’

“I thought they could have given him a more realistic send off. But that’s soap, isn’t it?”

Steve does a lot of fund-raising for mental health organisation Soteria Network:

“I’ve been involved in trying to raise awareness around mental health issues for some years now, due to the fact that it’s touched my life personally – I’ve had relatives that have been ill.

“And this particular one, it’s different in the fact that they’re trying to take steps to cure people. That’s the plan anyway. To actually work with people and try and keep them off medication as much as possible.

“The general public don’t realise the involvement the drug companies have in mental health. They have a huge investment in it. And the drugs aren’t always the things that helps. It just clouds up the original basic problem.

“A lot of the medication is toxic and it does kill people. Also it costs on average about £350 a week to keep somebody on that stuff.

“So the fact that Soteria’s intention is to set up houses where they can treat people without medication – by basically being attentive to them. It’s worked in America – they’re following an American model. It’s got an 80 per cent success rate in America.

“It’s difficult raising money for mental health. People switch off a lot when you start talking about mental health. But what they don’t realise is it affects most people’s lives in some way, directly or indirectly.

“So if I can use my profile to try and raise some awareness and some money – there’s plenty of people doing stuff for children’s charities and cancer and stuff. I’m not knocking that in any way, it has to be done. But if I was to say – let’s raise money for these little kittens, the money would be raised a lot quicker than it would be for Soteria. Which says something about our society.”