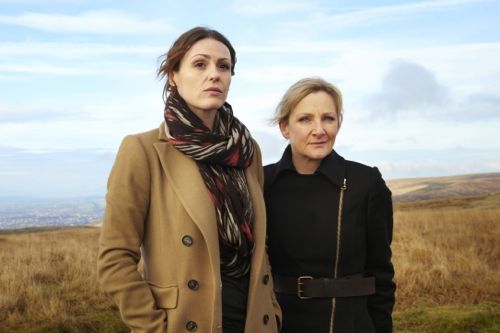 IT was the highest rated new British TV drama of 2011.

And is due to return to our screens next month (March).

As well as writer Sally Wainwright and co-creator Diane Taylor.

My early taster for the new series ran in the M.E.N. yesterday.

And here it is online:

Former Coronation Street star Suranne Jones was among cast members on location for hit ITV1 series Scott & Bailey, set in and around the city, when life began to imitate art.

“We were in a place where a real raid was happening on the same street that we were filming,” she explained.

“So we are in the places where these stories are actually taking place.

“That’s how real it is – and frightening for us as well.

“You could see real police vans around but the crew just ushered us to get on with filming as we had our own job to do,” added Suranne.

Made by Manchester’s Red Production Company, Scott & Bailey was the highest rated new British television drama of 2011 with 9.4 million viewers.

The second eight-part series, due on screen next month, includes a violent scene between Lisa and Suranne’s characters.

“She punches me in the face and then tries to throttle me. We filmed that for about a day and a half,” explained Suranne, who last acted with Lisa when they were teenagers at Oldham Theatre Workshop.

Said Sally: “Diane’s just massively experienced, both as a Senior Investigating Officer at Greater Manchester and working at the National Crime Faculty, helping to solve murders all over the country.”

Lesley Sharp, who plays Manchester Metropolitan Police detective Janet Scott, said the setting for the drama was an important factor in its success.

“The locations for Scott & Bailet are very evocative. It’s not the sanitised version of Manchester. It’s north Manchester, Oldham, Whitefield and Chadderton.

“They don’t run around in glass buildings these cops. They’re out and about in back alleys, in windswept avenues – it really adds to the show,” added the Manchester-born actress.

The drama was originally devised by Suranne and former Weatherfield co-star Sally Lindsay, who plays her screen sister Alison.