Award-winning Peter Morgan talking about The Jury, which begins on ITV1 at 9pm tonight.

“A trial brings people together in a way that really intrigued me.”

Peter wrote the first series of The Jury, screened in 2002.

Returning from the world of feature films to create the second series – not linked to the first – which is broadcast across five consecutive nights this week.

My feature on The Jury 2 was in Saturday’s MEN – and is online below.

Followed by some extras from Mr Morgan.

JULIE Walters can still recall the letter arriving to call her up for jury service in Manchester.

Long before she became an Oscar-nominated actress, the Harry Potter star was a young student in the city.

Although she wanted to do her duty, Julie was worried about the impact on her English and Drama studies at Manchester Poly, now Manchester Metropolitan University.

“So I said I couldn’t do it and I’ve never been asked again,” she explains, having finally filmed her first ever courtroom role in The Jury (ITV1, Monday, 9pm).

Julie, 61, plays defence barrister Emma Watts QC in the five-part serial which is screened across consecutive nights next week. 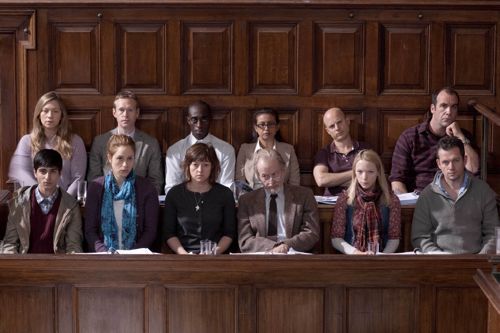 Award-winning Peter Morgan was “lured” back from the world of feature films to write the drama, having also created ITV1’s original The Jury, screened in 2002, when Derek Jacobi played the counsel for the defence.

“I thought the original series was fantastic. It was one of the reasons I wanted to do it,” reveals Julie, who found parallels between barristers and actors.

“Yes, because you’ve got to convince people of a truth of some sort. So it is absolutely like performing. I think they all are a bit of that ilk.”

Peter’s subsequent credits include The Last King of Scotland, The Queen, Longford, Frost/Nixon, The Damned United and The Special Relationship.

But he felt compelled to return to television for this production and already has ideas for a third series, if this one is a hit with viewers.

“ITV owned the rights from the first one. I very much wanted to do the second part because I could see in my mind where this could possibly go and that it would offer an opportunity to explore any number of interesting, different trials,” he says.

This latest story keeps viewers guessing until the very end about the guilt or innocence of Alan Lane (John Lynch) who is undergoing a re-trial after the Court of Appeal overturned his conviction for the murders of three women.

It also tells the story of the 12 jurors both as they sit in judgement and their varied, often complicated, lives away from the court.

Julie made up for lost time in Manchester, soaking up the legal atmosphere on visits to the Old Bailey and filming both there and in an authentic courtroom in Kingston, Surrey.

“It’s very atmospheric when you get going,” smiles Julie, who as a Coronation Street fan will have kept a close eye on Fiz Stape’s own recent TV trial – also accused of a triple murder.

Charismatic QC Emma is, by her very nature, a persuasive character who wants to get to the truth. “I’ve never played anyone like that before and I’ve never been in this kind of drama before. I loved all her speeches and the coolness and the clearness and the factual nature of it. There’s something very comforting playing somebody like that. 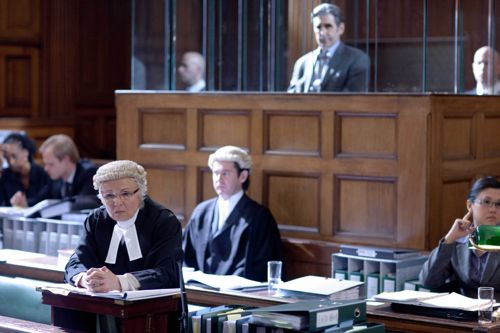 “I also loved dressing up in the costume. It made me feel massively important. Especially when we were hanging around places like the Old Bailey. I think there is a glamour about it.”

The Billy Elliot and Mamma Mia! star’s only previous brush with the law was some 20 years ago, fighting and winning her case when she was accused of driving through a red light.

By sheer co-incidence, the female QC who gave her some informal advice in court then was chosen to help Julie with her research for this role before she began filming.

“She said, ‘You’re not a social worker. You’re there to win.’ QCs do play mind games with one another. There is definite competition but there is also a camaraderie. Everyone would, generally speaking, know everyone. She gave me loads of little tips like that. And that most QCs have terrible hair because of the wigs.

“I can’t imagine doing that job. Being able to be combative and articulate and cool and factual and ordered in your thinking, it’s just not me, I’m afraid. That’s why it was lovely to play her.”

Was she recognised at the Old Bailey? “I went in a couple of days with a QC and I watched two or three murder trials, just bits of them.

“There was one where there was a group of very young kids – and I think they were just saying, ‘Who’s that that’s come in?’ I don’t think they recognised me. I don’t know. But there was a lot of giggling going on. Then we had to stop and have tea with the judge, which was very nice.”

But she has no immediate plans to adjourn her recent run of serious roles for a return to comedy. “No, not really. I don’t look for anything. I just see what comes in.”

“ITV hadn’t approached me and I hadn’t approached them. I assumed from their silence that they didn’t want one. And I think they assumed because I’d been writing films that I wouldn’t do one. And so we just got into this impasse of misunderstanding – then they asked me if I’d write something. And I loved writing it and really felt I’d missed it.

“I really just wanted to write a character drama and the trial gives me the legitimacy to do that. But then when it gets into the trial bit I sort of go, ‘Ooh, yeah.’ I’m really happy there is the red-blooded meat and potatoes as it were of a whodunit. And I still can’t tell you which bit I like doing more. Probably the two together.

“I tried writing The Queen without Tony Blair and it was really dull. And I’m sure if I’d have written about just Tony Blair…but somehow the two of them seemed to fit together as a story. I only unlocked the story about The Queen by having him in it. And similarly here. It unlocks the personal stories to have a crime whodunit go right through it like a skewer.

“A trial brings people together in a way that really intrigued me, where you pick anybody. Anybody in this country can be a juror. Even, as you see from one of the storylines, someone who isn’t a British citizen can be a juror. That’s so nice – you can write how we are today. I love writing different characters.”

His view on the UK jury system?

“I’m of the view that any of us could have a really tough predicament in our lives and we could pick any 12 people and say, ‘What should we do? Should I marry this person?’ And there’s such a body of life experience – I’m trying to say I’m a big fan of jury service.

“Although the criticism is that it’s costly and it tends to acquit, just the idea of an 800-year-old system that is still so integral and I don’t think any system that’s been designed to replace it has improved upon it.

“I’m a big believer in the fact that the combined life exprerience of 12 people, whether you go from someone who can barely read and write to highly educated and rich and poor and Ango-Saxon, coloured, whatever, that body of experience taken collectively is very powerful. And there are so many nuances which even an unbelievably sophisticated legal system cannot address.

“Human instinct is powerful. I don’t think it’s easy to lead 12 jurors. You can lead one or two people but you can’t hoodwink 12 people. So I personally have a great deal of faith in the jury system, which is why I have got that long running story in this drama about whether it should be abolished or not. So that we can have some of those arguments being discussed.”

“One of these murders would normally take two to three weeks. It might be quite traumatic, the case, and what you hear might have a big impact on you. But actually it can be that you get really unlucky and you get called in for six, eight months for a fraud trial. Think of the impact that would have on your life?

“I would like a jury to go through more pain than they go through in this one. And I would like to actually go and meet some former jurors who had been in a case that had gone on that long.

“I’d also quite like to explore possibly a story where it’s not just a straightforward did he or didn’t he murder somebody? But possibly that a government was involved and that maybe the jurors are being tapped and maybe they’re being watched. I’d like to make it even more uncomfortable for them. Because God knows what happens then?”

A Star Cast For The Jury – Controversial New Drama From Granada

Made by Granada Television, the six-part series tells the story of a shocking murder trial that will grip viewers from the first and keep them in suspense to the last. Granada’s crew was the first ever to be allowed filming access inside the Old Bailey.

The Jury has at its centre a trial that is a microcosm of justice and race in the UK. A 15-year-old white boy has been killed in cold blood and his classmate, a quiet reclusive Sikh boy, is on trial for the murder. The 12 jurors find the eyes of the whole country fixed on them as they are sent on the biggest soul-searching journey of their lives.