JUST under 36 hours to go now until the second series of Downton Abbey begins on ITV1.

As promised, below is my latest feature – published today in the MEN.

And if you haven’t done so already, you may also care to peruse these previous series two humble offerings:

THE recipe for TV success can be elusive, especially for those aiming to cause a stir with a new drama series.

No such problems for Downton Abbey, the award-winning television phenomenon, created by Julian Fellowes, returning for a second ITV1 series tomorrow night.

“I daren’t have predicted it – I’ve seen the best things go pear-shaped. It’s just great to be part of something this good,” declares Lesley Nicol, who plays cook Mrs Patmore.

“People I’ve never spoken to before come up and give me a hug.”

The daughter of a Scottish GP and Welsh actress, Lesley was born and raised in Irlam.

After early experience at Manchester’s Library Theatre, she trained at the Guildhall School of Music and Drama.

Her acting CV includes Blackadder, Shameless, Dinnerladies, The Lion, The Witch and The Wardrobe plus the London West End stage role of Rosie in Mamma Mia.

But like the rest of the cast, she was taken aback by the reaction to Downton Abbey. 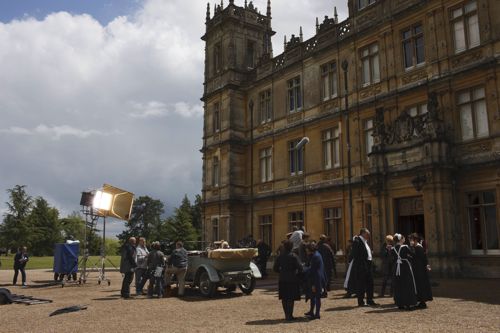 Millions have taken quick-tempered Mrs Patmore to their hearts. She rules the roost in Downton’s below stairs kitchen with plenty of acting required from Lesley.

“It’s hilarious playing a cook because I don’t know a thing about it. I’m a terrible cook.

“Thank the Lord, my husband is a brilliant cook. Before I met him, if you were my friend and arrived for dinner, it wouldn’t be ready. You would have to finish it because I’d be flapping.”

She adds: “Somebody asked me recently what my signature dish was. So I replied, ‘Mince and potatoes.’ My dad taught me. It’s not very complicated.”

One of her best friends is actress Anne Reid, who co-incidentally landed the role of cook Mrs Thackeray in BBC1’s revival of Upstairs Downstairs after Lesley was cast as Mrs P.

“Annie’s even worse than me,” laughs Lesley.

“She rang me up when she got her job and said, ‘You will not believe what I am playing.’ When I first went round to Annie’s for dinner in Cheshire she had made two things, in case the first one was wrong.”

The new series begins two years on in 1916 with Manchester solicitor turned Downton heir Matthew Crawley (Dan Stevens) and First Footman Thomas Barrow, played by ex-Coronation Street star Rob James-Collier, in the thick of The Somme during The Great War.

Episode two sees the shadow of war fall over Mrs Patmore when her nephew Archie, serving with the Lancashire Fusiliers, is reported missing, presumed dead, in northern France.

Head housemaid Anna Smith (Joanne Froggatt) persuades the worried cook to enlist the help of Lord Grantham (Hugh Bonneville) who can use his contacts at the War Office to find out more.

“The war affects all the characters hugely. There’s losses and heartache,” explains Joanne, who first came to notice as tragic young Weatherfield mum Zoe and has gone on to roles as diverse as Myra Hindley’s sister Maureen in See No Evil and Saskia in The Royle Family.

Anna’s troubled love affair with Lord Grantham’s valet John Bates (Brendan Coyle) appears to be on course for happiness in the opening 90-minute episode. She is tearful with joy as they kiss and embrace. But there are further twists on the horizon.

“We get excited about our scenes when we get new scripts from Julian and genuinely love playing Anna and Bates,” smiles Joanne. “It’s so nice to come back for a second series and already have a friendship and be able to just slip into the scenes.”

This eight-part series will be followed by a Christmas special. A third Downton season for 2012 appears certain.

“You want to keep going while it’s flying high and I’m sure Julian can make that happen for many years. It’s shown the public do want to watch great drama and exceeded all expectations,” adds Joanne.

The “upstairs” scenes are shot on location at Highclere Castle in Berkshire, with the below stairs set built at the rather less stately Ealing Studios in west London – including Mrs Patmore’s kitchen.

It plays host this year to Lady Sybil (Jessica Brown Findlay) who wants to learn how to cook for herself before going off to train as a nurse. And we soon discover she can’t even fill a kettle, let alone make tea or boil an egg.

Lesley admits it feels very strange whenever the “upstairs” cast step into her world.

“They look all wrong. When I had a scene with Lady Grantham (Elizabeth McGovern) last year, I genuinely called her ‘Your Majesty’ three times. It felt like I was with the Queen because she looked like a different human being to what we are.”

She blames historical adviser Alastair Bruce for her own confinement, aside from a hospital visit last year to have Mrs P’s failing eyesight fixed.

“I hardly ever get out of the kitchen. In the last series there was a line-up of all the staff when a Duke came and he wouldn’t let me be in the line-up. He said, ‘There’s no way you would be there. You’d be in the kitchen with a huge dinner to prepare.’”

Both Mrs Patmore and this global hit really are cooking on gas. “They have proper heat, so we can have the pans with steam coming out. But we have to whisk and chop silently for sound reasons, so as not to drown out the dialogue.”

Even so, filming can sometimes take time to come to the boil.

“We did a scene the other day where we were all having a glass of wine as a treat at New Year. And we had to do it 12 times. A nightmare for them because they’ve got 20 glasses that they’ve got to empty out, wash, polish – it takes forever. But it was only cranberry juice.”

Meal times can also be challenging.

“We were eating Christmas pudding for a scene in the Christmas special and it had that custard from Marks and Spencer which is really nice. But after 45 minutes of filming I didn’t want anymore. That was tricky.

“I wouldn’t normally go near any of the food, frankly. But then I know that it’s sprayed with stuff so it doesn’t go off under the TV lights.”