SHE’S told the story before.

But it’s one worth repeating in the wake of ITV’s decision to move out of its historic Manchester HQ in Quay Street.

“When I went to Granada in the 1960s it was like a cottage industry,” recalls Anne Reid.

“One night it was foggy and before the Law Courts were built there was a wonderful pub called the New Theatre Inn, where we all used to go as a Granada watering hole.

“And we got stuck, some of us.

“We actually climbed over the back wall of Granada and went and opened the dressing rooms and slept in there all night.

“You couldn’t do that today. You’d set off every alarm in the world.

That was one tale I didn’t have room to fit into my feature interview with Anne, which appeared in the Manchester Evening News last Saturday.

You can read the feature below.

Marchlands begins on ITV1 at 9pm this Thursday, with Anne arriving from episode two.

THE Queen had never met Anne Reid. Yet they chatted like old friends at Buckingham Palace last year.

“I didn’t feel the least bit intimidated because I felt the Queen and I have known each other all our lives, since she was a little girl,” recalls the former Cheshire-based actress.

Anne, 75, did think about turning down the MBE for services to drama that led to her royal encounter in the Palace investiture room.

“I was working, doing a radio play, and I got a message saying, ‘Will you ring the Cabinet Office?’ My first thought was, ‘Well, it’s April and I’ve paid my tax and it’s not due until July.’

“So I rang the gentleman and I said, ‘Have you got the right person?’ And he said, ‘Are you Anne Reid, the actress? We want to put your name forward.’

“I had to sit down to think for a minute and said, ‘Oh, I don’t know. Can I ring you back?’ And he said, ‘Does this mean you’re not going to accept it?’ Then I thought, yes, I should, really, and how proud my parents would have been.

“I did argue about it. Acting is so much a matter of opinion. It’s not an exact science. And I’m not sure I’ve given services to drama. I’ve had a very good time and I’ve been well paid for it, certainly in the last few years.

“So I think only roadsweepers, nurses and people who really do a service for the community should get awards. But it seemed churlish not to accept it.” 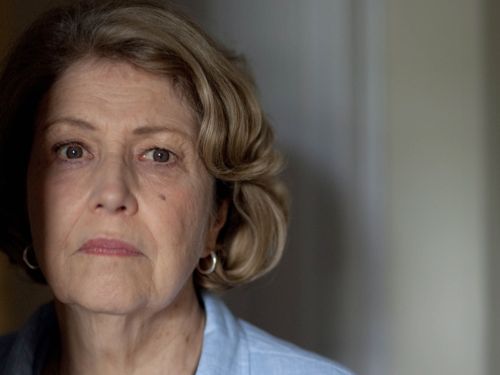 The Queen was animated in her conversation with Anne. “But I’m not going to tell you what she said because we’re not supposed to say. She was just nice, talking about what I’d done,” adds the actress, last seen on screen as cook Mrs Thackeray in BBC1’s revival of Upstairs Downstairs.

“I always seem to get downstairs roles, although I did play Barbara Cartland a few years ago. I don’t know why casting directors do that. I think it was Coronation Street that started that off. When you’ve been in the Street, they tend to think you’re working class forever.

“Well, I’m certainly not upper class. But I had a strange childhood and I never think of myself as any class at all. I never had a home, not from being very young, because my parents lived abroad.”

She was born in Newcastle upon Tyne, where her father Colin was a reporter for the Evening Chronicle before moving to the Daily Telegraph and spending years based abroad. Her uncle worked for the MEN, while her brothers were also journalists.

Anne was sent to boarding schools in the UK and visited her parents in the holidays. “I discovered I could act when I was at school at Penrhos College in Colwyn Bay. I had quite a strong north eastern accent and my dad wanted me to get rid of it. So he put me through elocution lessons and I started learning bits in plays.”

Although she left half a lifetime ago, she is still remembered as Ken Barlow’s wife Valerie in Coronation Street, killed off in 1971 when her character was electrocuted by a hairdryer.

“For years after I left I got so bored with people asking me about it and people still recognise me 40 years on. But I’ve sort of come to terms with it now. I’ve had to really. I enjoyed it but I have no regrets about leaving. I’ve done masses of stuff since and I would have missed all that.”

After leaving Weatherfield, Anne spent 14 years away from acting following the birth of son Mark, now a film editor. She also looked after husband Peter – the former Head of Drama at Granada – who was fighting cancer and died in 1981.

She returned to work in 1986 and went on to appear as Jean in Victoria Wood’s Manchester comedy Dinnerladies. also starring in a number of other roles, including providing the voice for Wendolene in Wallace and Gromit’s A Close Shave.

But it was sex scenes with future James Bond Daniel Craig in 2003 film The Mother that caused casting directors to look at Anne afresh. “That changed my life, because since then I’ve had the most wonderful variety of roles.”

The latest is a major part in ITV1’s new five-part drama Marchlands, playing a woman who arrives in episode two of the haunted house mystery. So as not to spoil the story, her identity is best kept under wraps until it’s revealed on screen.

The spooky tale features the repercussions of the death of a little girl on three separate families who live in the same house in 1968, 1987 and 2010.

Does Anne believe in the supernatural? “Absolutely. I’ve had a lot of people die on me in my life. My mother and father and my brothers and my husband. And I never feel they’ve gone anywhere at all. I feel constantly surrounded.

“I went to see somebody once who said, ‘Two people came in with you.’ I don’t even think about it. I can’t say that I’m really psychic but I’m never surprised when things happen to me. I just think about things and they happen. It’s very strange.”

Anne found herself working on two series at once. “I was in Cardiff filming Upstairs Downstairs one day and then the next day they sent a car to take me to Surrey to film Marchlands. Then it was back to Cardiff. I never knew where I was. Not that I’m complaining.”

She’s waiting to hear if there will be a second series of Upstairs Downstairs and is bemused by media reports pitching the “rival” drama into battle with Downton Abbey. “It’s too silly for words.”

Her counterpart in the ITV1 show – cook Mrs Patmore – is played by Manchester-born Lesley Nicol.

“She’s a very old friend who I always stayed with in London whenever I came down from Manchester. So I wanted Downton Abbey to be a success for her. And I enjoyed it very much. I don’t see why we have to be compared with it. It’s daft.”

Although now based in a central London flat, Anne still makes regular visits back to Cheshire and spent Christmas in Congleton. “I miss the countryside and I miss my big house.

“But I spent my life on the M1 for 30 years. I was always driving up and down doing things and it just got a bit too much in the end.”

Not that she has any plans to retire. “I’d love to do something in America, be in a play on Broadway, a comedy in the West End or a drama in a film. I just want to play good parts.

“How long have you got? I’ve got loads of ambitions.”

*Marchlands begins on ITV1 at 9pm on Thursday.