SHE may be 90, but there’s still a twinkle in Betty Driver’s eye.

Corrie’s hotpot queen has been in showbusiness for 80 years and was a leading lady of stage, film and TV long before Weatherfield came calling.

Betty is the subject of tomorrow’s (Sunday) Desert Island Discs at 11:15am on BBC Radio 4, expertly presented by Kirsty Young.

I’ve already listened to the programme and written a story to go online after the embargo expires at midnight tonight.

But, for now, let’s just say that castaway Betty is not to be missed.

She is also the subject of a forthcoming hour-long ITV1 documentary – The Betty Driver Story.

I wrote about that for yesterday’s Manchester Evening News.

The Pg 9 feature has yet to go online – so let’s put that right below.

CORONATION Street star and national treasure Betty Driver insists she has plenty of pints still to pull in the Rovers Return.

“I want to die working – they’ve told me I can stay as long as I want to, leave when I want to, and it’s a wonderful way to be,” she says.

But she was a huge singing star of stage, radio and big screen long before she appeared on television in 1952 in her own show.

The latest accolade in a showbusiness career that has stretched across nine decades comes this Sunday morning when she becomes the latest castaway on BBC Radio 4’s Desert Island Discs, part of which was filmed for The Betty Driver Story (ITV1, Tue Feb 1, 8pm).

Presenter Kirsty Young travelled to Manchester to record Betty’s radio choices and tells the hour-long TV documentary: “I think Betty is an ideal castaway for Desert Island Discs because she has a whole other life that people don’t know about.

“People have been watching her for decades on Coronation Street. Everybody in Britain knows who she is. And yet she had this whole other life – she was one of the biggest names in showbiz before she started her television career. There’s not many people you can say that about.”

The ITV1 film is narrated by Sir Ian McKellen – a former Corrie cast member himself – who says of Betty: “She is Manchester’s, if not the world’s, oldest and best loved barmaid.”

It outlines a difficult childhood, dominated by her pushy mother Nell who lived her own frustrated stage ambitions through Betty.

“She was very, very strict. If I didn’t do something right, she’d smack across the face or hit my hands with whatever. She was very difficult,” recalls the former child star.

“I would have done much better if she’d have been soft with me and sometimes put her arms around me and said, ‘You’re good.’ But she never did.”

In 1934 young Betty landed a film role with George Formby. But his wife, worried about being upstaged, is said to have demanded she be cut from the final version.

Betty can laugh about it now but recalls: “I cried all the way home on the train. I thought, ‘What a damn shame.’ But never mind. It was experience. That’s all.”

Four years later, aged 17, she was contracted as leading lady in three films. The first – Penny Paradise – was a hit. Her biographer Daran Little, also a former Corrie scriptwriter, explains: “Betty was still only a teenager when she was given a film contract.

“This is like the equivalent of going to Hollywood, as far as she was concerned. And that’s really when her star started to really rise and people stood up and noticed, saying, ‘Who is this amazing singer?’”

She starred again in a second film – Let’s Be Famous – before her movie career was halted by the outbreak of war in 1939. “I really loved making films. That why I love television,” says Betty.

Sadly, the money she had made was taken by her mother, and father, Frederick. “He drank most of it – so that was one fortune gone.”

A post-war marriage to South African singer Wally Peterson ended unhappily when he had a string of liaisons with other women. In her biography, Betty described it as “the biggest mistake of my life”.

Wally had also spent her money. “I’m not a bitter person but it makes you a bit bitter when you’ve been diddled two and three times in your life,” she adds.

In the late 1950s and early 1960s, Betty turned her attention to acting, landing a TV role in gritty social drama Love On The Dole and then co-starring with Arthur Lowe in the Coronation Street spin-off Pardon The Expression.

She suffered a back injury after a stunt went wrong in the final episode and retired from showbiz to run a pub with her beloved younger sister Freda – her greatest supporter – who died two years ago.

But the rover was persuaded to return. Betty was 48 when she landed the role of her namesake in Weatherfield, seven years after getting to the last two when auditioning for the part of Hilda Ogden, taken by Jean Alexander.

Bill Kenwright is now one of Britain’s leading theatre producers. But Corrie fans still remember him as Betty’s screen son “our Gordon”. She says: “I wish he was my son. I love him to death.”

The feeling is mutual, with Bill sending flowers to his “mum” every Valentine’s and Mother’s Day. “It’s because she’s got something so special. If you could bottle it, you’d have the keys to the kingdom,” he maintains. “She won’t retire. If she does, she’ll phone me and I’ll talk her out of it.”

Betty jokes: “You name it, I’ve done it. And all of a sudden, I’m in Coronation Street and I finish up with bloody hot pot top of the bill and not me. And that’s not fair,” she laughs. “They’d have to shoot me to get rid of me.”

*You can vote for Coronation Street at next week’s National TV Award – click here for the website. 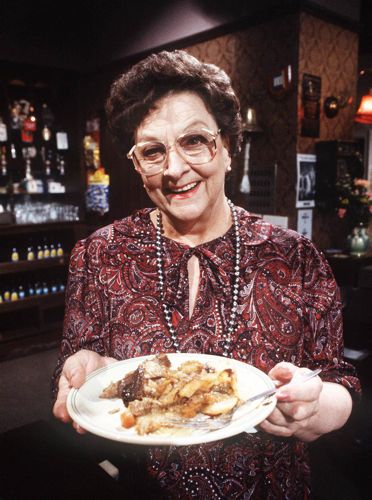