As Hermione Norris (Ros) told me recently: “Spooks without Harry Pearce would be non-existent.”

Fans knew in advance that Ruth was returning.

The big surprise in episode one was Malcolm walking away from The Grid after his decision to retire.

Is that the last we will ever see of him?

“It was his first job out of drama school,” explained Hermione.

“It’s daunting coming in and the pressure…

“You go from inertia to cardiac arrest about six times a day. That’s what filming is like. 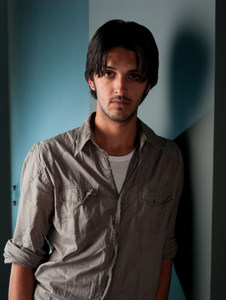 “And he just came in and did it really beautifully, calmly and simply. I thought he was amazing.”

UK viewers who want to see episode two before next Wednesday’s regular BBC1 screening should tune in to BBC3 at 9pm on Friday.

“The boy, your..?” Harry asks Ruth in the opening seconds.

Ahead of a flurry of revelations on London’s Millenium Bridge.

With Ruth concluding: “You have a knighthood, Harry, and I’m dead.

But watch this space.

A gas processing plant in Essex provides an explosive start.

Spooks devotees will know that as soon as someone says, “Your future is safe with us,” it’s time to run in the opposite direction.

Week two is all about an energy crisis and a very nasty man from Tazbekstan.

Rustam Urazov appears to have been separated at birth from whoever stokes the fires of hell.

There’s a revelation about Harry, Norway and Christmas.

And mentions for both the NME and The New Statesman.

Before she sends in the clowns.

While a freelance journalist with a blog causes Lucas (Richard Armitage) to despair of the “bloody internet”.

Which you perhaps might take as an in-joke tribute to online fans who monitor the filming of Spooks for any news.

Not much happens at all in one of my favourite scenes close to the end.

Two great actors with a bottle of single malt.

Followed one scene later by a second late night meeting between them on The Grid.

Setting up the terrifying central storyline which will run through the rest of the series.