IT was the first week of Wimbledon in June when I met up with Laurence Fox in London.

To talk about his festive TV drama filmed in the spring.

Such is the way of Christmas television.

Fast Freddie, The Widow And Me is on ITV1 at 9pm on Tuesday Dec 27.

My feature is in today’s (Saturday) MEN and below, with some extras.

WHAT would be your perfect Christmas if you knew it was your last?

“I’ve always wanted to write about the magic of Christmas colliding with the way we torment ourselves trying to make that one day perfect,” explains writer Christopher Dunlop.

The result is Fast Freddie, The Widow And Me (ITV1, 9pm Tuesday Dec 27) which may just give you pause for thought after the festive feast.

Waterloo Road star Jack McMullen plays Freddie, a teenager with a terminal illness. Having been fostered for most of his life, he knows his time is running out.

“Freddie has a kidney disease that needs operating on but he’s got a heart condition that is preventing the operation that will save his life,” explains Jack, who has also appeared in Salford drama The Street.

“I read the script and what was intriguing about Freddie is that he’s come to terms with dying at such a young age,” adds Jack, who plays Finn Sharkey in BBC1’s Rochdale filmed series.

“I did a bit of research because Freddie is in a lot of pain in a few scenes and I wanted to make sure I was playing it right. I spoke to a kidney specialist who described what he would have gone through.”

Freddie attends the Moonbeam Club, run by former teacher Laura (Sarah Smart). She’s the widow in the title, her husband having been killed in a skiing accident.

Laurence Fox plays brash luxury car salesman Jonathan Donald – the “and me” of this TV equation. “He’s a bit of an idiot. A loose women, fast cars kind of guy, with a million quid in the bank,” explains the Lewis star.

Convicted of drink-driving, Jonathan is given a community service order and sent to help out at the club, which caters for young adults with social and behavioural difficulties.

“I sobbed when I read the end of the script,” confides Laurence, who relished the role of a Bentley-owning wide boy. Jonathan tracks down Freddie’s real mother who denies she is anything to do with him.

So he sets about giving the teenager a perfect Christmas, including buying him a fake mum, played by Tamzin Outhwaite, and family.

“He sees this book that Freddie has written about how his life would have been if he was going to live and Jonathan gets most of his ideas from that,” says Laurence.

“We did have fake snow at one point when filming in the spring. At one point I looked around and one of the actors was shivering and was actually genuinely cold. It was about 28C! It’s amazing what tricks huge amounts of snow can play on the mind.” 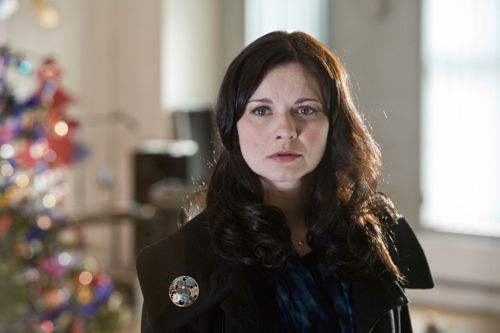 Wallander, Doctor Who and At Home With The Braithwaites actress Sarah was also overcome when she first read the story. “I was crying all the way through. My script was soaking wet by the end of it.

“My mum used to look after youngsters with learning difficulties and behavioural problems. We’d go there as kids and put on plays. So I knew what it was all about.”

She laughs: “I’m a massive fan of Christmas. So filming this was a dream come true. It was like being in a Christmas snow globe for a few weeks.

“We also filmed in a department store in May with tinsel everywhere. We were working in the middle of the night but I started my Christmas shopping then.”

She continues: “Fast Freddie, The Widow And Me is a real family show. It’s a lovely story and not overly-sentimental. A tear-jerker but also funny. Everyone will be crying at the end.”

Sarah is also a fan of Laurence’s actress wife Billie Piper who is expecting the couple’s second child in April. Their son Winston is three.

“Bill is Christmas crazy,” smiles Sussex-based Laurence. “That Mariah Carey CD comes out so early. We have to get separate car journeys to places so I don’t have to listen to it.

“My perfect Christmas is real small and quiet, down in the country. Walk down the pub in the morning for an hour. Come home, eat food, watch TV and chill.

“And sometimes you want to go to visit people rather than having them round. All of that endlessly cleaning up Terry’s Chocolate Orange bits from behind the sofa.”

Laurence will be back as Det Sgt James Hathaway alongside Kevin Whately in a new four-part series of Lewis for 2012.

Would he like his wife to appear in a guest role?

“No way. I’m going to direct her in a film one day. But I don’t think she wants to be in Lewis. Maybe we should get her in? But my cousin Freddie Fox is in the new series. He’s playing a nasty little scamp.”

Jonathan’s perfect Christmas for Freddie doesn’t turn out quite as planned. “There’s snow, the best house and great food,” says Jack, who has also starred in Grange Hill, Brookside, Moving On and Casualty.

“There is a moral to the story. Christmas is meant to be about family and not all about money and superficial things. I want to spend Christmas this year with my family because that’s what it’s all about for me.”

Writer Christopher concludes: “Fast Freddie, The Widow And Me creates an idyllic family Christmas from the most unlikely collection of characters who in the process rediscover faith in life, love and hope for the future.” 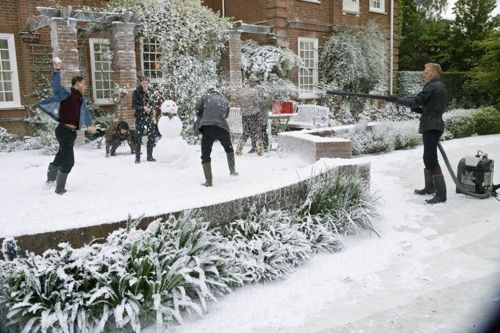 GOING underground was not an option for Laurence Fox when filming the festive drama.

“I’m very claustrophobic and it’s getting worse. I haven’t been on the tube in 15 years,” he explained.

“I have a motorbike. I don’t ever want to be underground. I can’t be really close to people. I don’t like it.”

Former Doctor Who and The Secret Diary of a Call Girl star Billie is currently appearing in Reasons To Be Pretty at London’s Almeida Theatre and expecting their second child next spring.

How do the couple manage the pressures when they both have acting jobs?

“You try not to get divorced. It’s an incredible difficult time if you’re both working at the same time,” he explained.

“But that’s when love comes into the whole thing. You basically just have to do it.

“I think that’s why showbiz marriages break up because you need looking after. It’s difficult.”

*Your can hear a different side to Laurence at laurencefox.co.uk

Fast Freddie co-star Sarah Smart has revealed why she won’t be driving home for Christmas.

As widowed former teacher Laura in the drama, she is seen at the wheel of a mini bus full of youngsters.

“But I don’t actually drive in real life. There’s too many cars on the road and it’s far too scary,” says Sarah.

She learned to drive a Lotus when playing Virginia in At Home With The Braithwaites and a double-decker bus for ITV1 drama Jane Hall.

“I can only do stunt driving on TV when they stop the traffic for you. I don’t want to be on the roads in real life.

“I used to own a car but my friend said, ‘I don’t mean to upset you but you’re not a very good driver. I don’t think you should drive anymore.’

“My concentration span isn’t that massive.”