MATT Smith summed it up at tonight’s press launch for the new series of Doctor Who:

“I think that’s great television – it’s certainly not a part I want to give up anytime soon.”

Episodes one and two of season six provide the darkest – and scariest – opening ever to a Doctor Who series.

Ninety minutes of sometimes quite astonishing television containing secrets that cannot yet be told.

Gathered at London’s Kensington Olympia, current home of the Doctor Who Experience, we were shown the two-part opener – The Impossible Astronaut and Day Of The Moon.

You will find some spoilers below but, I hope, nothing major to detract from your enjoyment of watching these two episodes for yourself.

But if you want to remain totally spoiler-free, do not read on.

It’s already been reported that one character is killed in episode one. Steven asked the press not to reveal their identity and I certainly won’t be doing that here.

There are chilling monsters in the first two episodes, partly inspired it appears by Edvard Munch’s painting The Scream.

Amy is the first to see them. But when she look away, she doesn’t remember they existed.

We eventually discover what these creatures with the power to make you forget are called.

But to reveal that here would spoil one of Moffat’s masterstrokes in linking the past to the future.

The same goes for the contents of a photo frame.

And just who is the little girl who features throughout, including a remarkable moment at the end of episode two?

We see River both slap and kiss the Doctor, knowing that this is the series when we finally discover who she is.

The opening minutes find the Time Lord where you wouldn’t expect to see him, including in a Laurel and Hardy film.

Four envelopes in Tardis blue lead us to Utah and the middle of nowhere as the Doctor tells River, Amy and Rory: “Tonight I’m going to need you all with me.”

He talks of heading for space in 1969 – the year man first set foot on the Moon. Then an astronaut emerges from a lake.

These American-set episodes, both written by Moffat, are dense with events, ideas and terror, as well as moments that had tonight’s audience laughing and applauding.

With, as Matt pointed out, a real feeling that Moffat is pushing the envelope of what Doctor Who can achieve.

One small step for man, one giant leap for Who-kind.

It’s clear Amy will be at the centre of this series. While River reveals: “There’s a far worse day coming for me.”

Not forgetting President Richard Nixon, Neil Armstrong and an old man with a petrol can.

It all begins – both in the UK and America – on Easter Saturday April 23.

Below is my transcript of tonight’s Q&A. Edited highlights, though I guess it contains around 90 per cent of the content:

You had fun writing that, didn’t you Steven?

“Oh, how could you not have fun writing that. Of course. It’s all my favourite things. It’s the Doctor and monsters and the Tardis and River Song and nonsense. Yes, I love it.”

We find out who River Song is in this series?

“I knew a lot before any of the others and I didn’t reveal a thing,” explained Alex.

Matt said the cast learned the secrets of the entire series rather late in the day. “We only found out last week.”

Matt: “With anything Doctor Who, it tends to be the sum of its parts. On this one, I think the idea behind them is particularly clever and they’ve been realised very well. So physically they’re brilliant…”

Karen: “They look repulsive, which is always scary.”

Matt: “And that voice is quite scary, isn’t it? And the idea that you can look and forget, it’s a clever, scary idea.”

Alex: “I think they’re a little bit like the weeping angels. They’re creations that you sort of question whether…well, what if they do really exist. I think that that’s such a potent and clever and frightening concept, especially for children – rather than the classic Dalek or Cyberman. It’s much more psychological and really, really interesting and unnerving. And it looks like Edvard Munch’s The Scream.”

Steven: “Always in Doctor Who, you want something to conquer the world otherwise it’s a bit disappointing. But why don’t we ever remember? I just thought, ‘Well, what about a creature that can make you forget?’ I think that’s a cool idea. Once you’ve gone back downstairs, you can’t remember if there was something upstairs. I think that’s scary.” 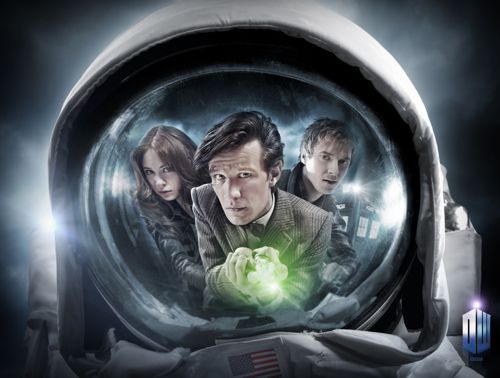 A lot darker? Any concern that it might be too frightening for children?

Steven: “Well, first of all you make Doctor Who frightening to appeal to children – and children absolutely rank Doctor Who stories in order of frightening-ness. That’s what it’s about. The jokes and the silly bits, they’re for the adults. But the scares are in for the kids. So no. I’ve got two kids of my own and I never do anything that I didn’t think was acceptable for them. Having said that, one of them does tend to sleep on our bedroom floor.

“To be honest, it’s darker than any other opener of a season. But we’ve been pretty dark before in Doctor Who. Blink was dark…The Satan Pit was dark. We’re coming in from the dark side just because we haven’t done it that way before.”

Alex – did you prefer slapping or kissing Matt?

“Actually that’s quite a difficult one. I had to slap him many times and his cheek was getting redder and redder and he was getting actually irritated. (Looking at Matt) You got quite angry. You lost your sense of humour, I think, after five or something. I don’t pull my punches.”

Matt: “Alex…she’s pretending to hit me…”

Alex: “But the kiss was nice too. I didn’t have to kiss him so many times as I had to slap him. But they’re both fun. I quite like slapping.”

I asked Matt and Karen to talk through some of their highlights of filming this series and also asked Steven to talk about some of the guest characters and actors that we’ll see later on in the series:

Karen: “Filming in Utah was obviously a highlight.”

Matt: “Cornwall. The pirates episode…that was a belter.”

Karen: “Also learning to sword fight, that was really cool.”

Matt: “The current episode we’re filming now which is Steven’s opener of the second season. It’s a particularly brilliant opening. That’s been fun. James Corden is always a right laugh, David Walliams. It’s quite strange to look back.”

Matt: “Yeah, because it keeps on going. And as you can see, I think this season, I think each ep has the ambition of a film and the scope and the scale and the visual feels quite filmic. And to do that in the time we have is a challenge. But it’s a good one.”

Steven: “Late on in the series we’ve got Hugh Bonneville turning up in a vast, real beard. It’s actually his own beard. How brilliant is that? As a pirate captain. In the same episode we’ve got Lily Cole being absolutely terrifying as a monster…as a sort of mermaid…we’ve got James Corden coming back as Craig Owens. I loved that episode last year where the Doctor moved in and got a flatmate and tried to behave like a normal person. Suranne Jones is in the show. That episode is called The Doctor’s Wife. And the voice of Michael Sheen.”

This series will be split into a run of seven episodes and then six later in the year:

Steven: “Oh yes, you’ll get a cliffhanger. In fact, you’re going to get several cliffhangers. You had two just there. And you’re going to get a couple of real belters. Not just episode seven. Episode six is an absolute cracker, isn’t it? If you run for 13 weeks you can start to feel as though you can miss one ep and it’ll be OK. We don’t want that – we stop for a few weeks and let you all worry about what’s happening and then come back. Of course we get then two finales and two first nights.”

Arthur: “It really makes it hard to talk about it though, because there’s so many secrets and so many cliffhangers. It’s all linked.”

A younger member of the audience asked if there was a connection between the monsters and something seen at the outset of Matt Smith’s Doctor Who journey?

Matt: “I think that’s what the rest of this particular season is going to uncover for the Doctor…” (He said more but best not spoil it)

What are the wildest theories that you’ve heard about who River Song is?

Steven: “My favourite is. ‘Is she his mum?’ It does make me wonder if some of those people…maybe it’s time for them to move out of the family home.”

Karen: (looking at Alex) “There’s a few that we’re the same person.”

Alex: “Yes, I’ve seen that. I haven’t had grandmother yet. I’ve had people actually saying, ‘Is she the Doctor?’”

Steven: “The Doctor probably would snog himself.”

Alex: “I think the Doctor will always stay male. I can’t imagine…”

Steven: “That would be a frightener for River, wouldn’t it? Probably not, actually.”

Matt: “What’s been really good this year being on set is, because we’ve not known. All the information has come script by script, week by week. So we’ve sort of been – like I hope it will be on the sites and the fans and everyone else – theorising who she is and what she means and just what’s going on. And we spent quite a lot of time…and I think I went though about half of those theories myself at one point.”

Alex: “And can she be trusted? And what she actually says – is that true, false? You just don’t know.”

Matt, how are you feeling ahead of new series?

“I’m excited. I’m really proud of the episodes that we’ve got coming up. I think that’s great television and it’s good to be part of it. I think Steven’s really pushing the form and the way he’s telling stories. It feels a great privilege. It’s wonderful.”

Does Steven have a wish list of people he wants to recruit as guest stars?

Steven: “It doesn’t really work like that. We cast it when the parts come up. There is no wish list. It’s very specific to each script. It has to be. It can’t be done any other way.” Steven also said the casting director was very strict about not simply casting famous faces for the sake of it.

How long is Matt thinking of staying in the role?

Matt: “I take it year by year, month by month. So I’ll finish this particular season – and sit down with Mr Moffat and see where I go from there. It’s certainly not a part I want to give up anytime soon. I love playing him.”

The cast were asked about the sale of Doctor Who merchandise:

Alex: “There’s something that we can’t even mention, isn’t there?” She then whispered in Matt’s ear.

Matt: “No, because they’ve not been on the telly yet. So then we’d be giving it away. There is something.”

Matt: “We can’t tell you anything, but…”

Jon Culshaw asked the final question: “It’s only a couple of years or so until the 50th anniversary of the show. So I wondered, are there any thoughts or seeds of ideas at this early stage? Or would it be too soon to say?”

Steven: “Yes there are thoughts…” (laughter) 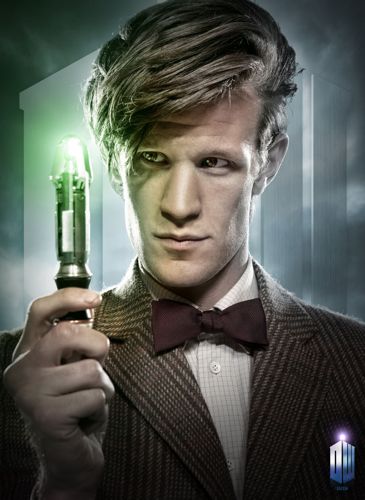