THE final episode tonight of ITV1’s latest Above Suspicion story.

So perhaps a good time to post my feature interview with leading lady Kelly Reilly online.

I met up with her in London last month.

Having already watched all three parts of Above Suspicion: Deadly Intent on preview DVDs.

If you’ve been watching Above Suspicion, you’ll know that the police team are on the trail of one of the world’s most wanted men, who has plastic surgery to alter his appearance.

Sat on the 22nd floor of ITV’s South Bank HQ in London, with a panoramic view of the capital, I asked Kelly if she would ever consider going under the knife in later life.

“You have to accept what you’ve got and who you are and grow old gracefully.”

Which, as far as I’m concerned, is the correct answer.

The below feature appeared in the Manchester Evening News on Monday (Jan 3).

FLAME-haired Kelly Reilly was ready for the big sting when she filmed a scene in a field full of nettles.

“They chopped some of them back before I walked in but I was going, ‘Ow, ow, ow’ and the director asked me if I was alright. I said, ‘I’m acting. That’s what you’ve asked me to do – to look like I’m getting stung by nettles,’” she laughs.

Screened over three consecutive nights, this latest story begins with plastic surgery in Mexico and ends with a revelation from the lips of DI Travis.

In between we have a tale of murder, a new identity and a potentially deadly drug called Fentanyl, which is a hundred times more potent than morphine.

Writer and executive producer Lynda was in America a few years ago when she heard about a series of drug related deaths caused by ‘Drop Dead’, the street term for Fentanyl.

Like many involved in the production, she had never heard of it before. “I met a surgeon in America and he said how careful they had to be in A&E departments because it kept getting stolen,” she recalls.

Although Anna is her own woman, there are obvious parallels between the female detective and Prime Suspect’s Det Supt Jane Tennison, played by Helen Mirren until that character’s screen farewell in 2006.

A teenage Kelly, now 33, made her TV debut alongside Helen in a 1995 Prime Suspect film. She agrees that Tennison and Travis share similar characteristics. “Anna has worked really hard. got quite far up in the police force and hasn’t really got much of a life. In the same way that Tennison didn’t.

“I always remember a scene in Prime Suspect where Tennison is buying a meal for one and a bottle of wine. There is a lonelieness to all these characters. And to see that in someone so young, you think, ‘Where are you going to end up?’”

The Surrey-born actress adds: “Anna is a woman within a world which we still perceive as very male. The last two stories were about murders of young women and now we’re dealing with the world of hard drugs and money. It’s not where you’d imagine seeing a young woman really getting her hands dirty.

“But Anna is very one track minded. When she gets a sniff of something, she won’t let it go. She’s driven by her instincts and emotions.”

Is Mrs Henderson Presents and He Kills Coppers actress Kelly as dedicated and persistent in her own career? “No,” she replies. “Maybe I was when I was younger. But not as far as it just consuming me. We are quite different. I’m a lot more laid back. I’m not as wound up as her and I like to think that my life is a lot more important than my job, whereas with Travis, her job is everything.”

Also currently reprising her role as Mary Morstan in Guy Ritchie’s second Sherlock Holmes movie, filming until the end of January, her character attracts plenty of male attention in Above Suspicion.

But Anna is not interested in the young men who seek her out, hoping for a date. Instead, Lynda’s script focuses on the attraction between her and volatile senior officer Langton, who asks Travis in the second episode: “Is there anyone in this investigation not coming on to you?” 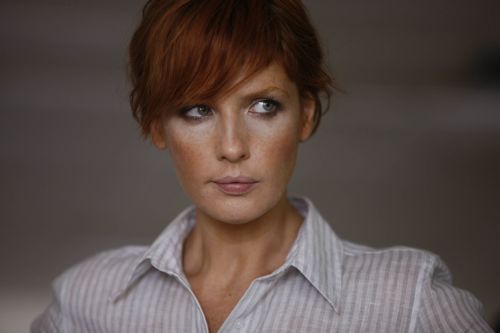 Kelly admits: “It’s not your regular love story. He is so much older than her and she is almost younger than herself. It’s not obvious. I think they both play a role for one another. They fill some gap. There’s an attraction but it’s so odd.”

Those who have read the novels will know the relationship has further history in the books. But Lynda has chosen a slightly different path for Travis and Langton on screen. “It happens a lot, which is why it used to be very frowned upon for any fratenising of police officers working on the same case. But also a higher ranking officer with a young female officer would be even more controversial, though it does happen,” says La Plante.

“In fact, two of my most valued researchers are two very high ranking police officers and are married to each other. Just like any workplace romance, if there’s a relationship between staff there are always raised eyebrows, murmurings and nudges.”

Planes, trains and automobiles feature in the conclusion to this story, including scenes shot at St Pancras International rail station in London.

“Lots of people were watching the filming. But they’re so used to seeing camera crews,” smiles Kelly. “They look over and go, ‘Who are you?’”